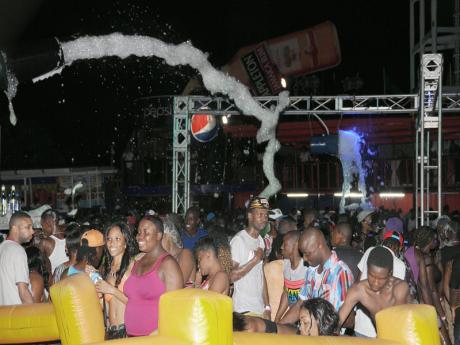 Jamaica might be experiencing one of the hottest summers in recent history and it is customary for persons to attend the numerous parties being held, but party promoters are expressing serious concerns over the severe water shortage that is affecting the island.

Earlier this week, Water Minister Robert Pickersgill instructed the National Water Commission (NWC) to issue a prohibition notice by this weekend. This means that persons can be fined $1,000 or spend 30 days in prison for disobeying the notice that prohibits the washing of cars, watering of lawns and the filling of swimming pools.

But the event that might be of concern to a lot of persons during the shortage is Water Worl that is being held today at the National Stadium car park.

Romeich Major, promoter for the event, explained that there are serious concerns about the shortage, and not just as it relates to his event.

"With or without the party, it (water shortage) bothers everyone," he said.

He noted, however, that the water that will be used at Water Worl is being sourced from private entities, not the NWC.

"The trucks that we get our water from come from Caymanas, not NWC. We are actually talking to the police because they are looking to see where the water is coming from," he told The Sunday Gleaner.

When the party comes to an end today, Romeich says Jamaicans will still be affected by the shortage.

"But if there is a water shortage, why isn't it affecting everybody? Uptown nuh have water shortage, but at my business place on Waltham Park Road, the water gone fi all eight hours straight," he added.

Deane Shepherd, one of the promoters for this Sunday's Cabana City Reserve, might not be hosting a water party, but the shortage of the precious commodity worries him.

"We don't normally get water from the facilities that we utilise," he said.

Instead, he said they would normally buy water from private companies.

"We are concerned (about the shortage). We don't use a lot of water, just for bathroom facilities and food preparation. But if it does continue to be scarce, we anticipate that the price of water from private companies will go up," said Shepherd, whose event will be held at the Waterfront in downtown Kingston.

Meanwhile, Ian Miles, who hosts the popular Container Satdazs at Gee Wee Car Park in St Andrew, says the shortage of water is certainly something that he takes seriously.

"It is a concern for real. If no water is in the venue, the patrons nah go have proper facilities fi wash dem hands after they go bathroom and such," he told The Sunday Gleaner, noting that Container Satdazs will be held on July 12.