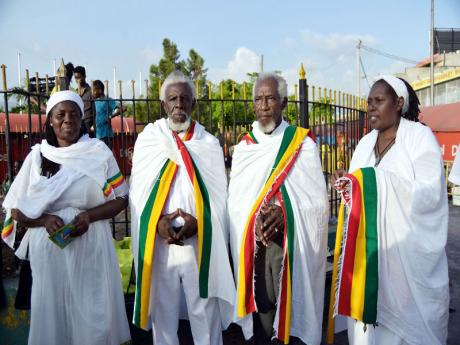 Rastafarians join with Christians at a pro-morality mass protest of church leaders and laity in Half-Way Tree, St Andrew.

This is our country, our land, our island, despite the love, support and respect for other friendly nations. It might not be paradise, but we are a very democratic country. No citizen, including those who are getting deported, should tear down his country for personal gain or collaborate with outsiders to spread misconceptions and malign this nation. In a society that has struggled through successive administrations of half-truthful politicians, we have to make certain that we are fair, balanced and honest.

Last week, I watched a protest as a still-undetermined number of demonstrators took to the street, seeking to defend their traditional family values and attempting to push back the gay lobby, which is bent on legalising another aspect of their way of life. It took me by surprise, because in a country where nearly three million of us live, I was of the distinct impression that it was unlawful or taboo to speak out against homosexuality.

In January 2013, there was another massive demonstration, and reports are that more than 300,000 citizens massed in the country's capital, facing what they considered to be a threat to the family being posed by the increased normalising of gaydom.

Now, before you start quibbling about the disparity in numbers between The Gleaner's report of 100,000 church-led demonstrators in Half-Way Tree on Sunday and the 25,000 reported by another media house, let me just point out that the protests referred to in the preceding paragraphs were in South Florida on Wednesday and the massive 2013 one in Paris. True, they were demonstrating against legalising gay marriage, but I do not hear anyone say France and the United States (US) are homophobic. So, on this wonderful little piece of rock, which has the freest press in the Americas, I have no problem if the Church protests.

It was thus very disturbing that in the previous week, the obscure Citizens Advocacy Group International Support Initiative (CAGI) was suggesting to the US government that it revoke the visitor visas of politicians and other citizens, including church leaders, who violate the rights of gays, arguing that it would not allow the Church to dictate what the rights of gays were to be.

Despite the furore, the United Nations (UN) has not yet recognised sexual orientation as a fundamental human right. For all the magnanimity of the US in establishing gay rights, it did not come about via national consensus. Rather, it is the 2003 case of Lawrence vs Texas that forced the defiant states of Alabama, Idaho, Oklahoma, Kansas, Louisiana, Michigan, Missouri, Mississippi, North Carolina, South Carolina, Texas, Utah, Virginia and Florida. Indeed, before that, in the almost eponymous 1986 case of Bowers vs Hardwick, the US Supreme Court did uphold the sodomy laws.

How does expressing an opinion about what one believes become hate? Religion, by its very nature, is exclusionary, since it prescribes moral behaviour. The Torah, which essentially incorporates the Old Testament, treats homosexuality as sin. So do the Qu'ran and the New Testament, which guide Muslims and Christians, respectively.

Our head of state is a religious leader and was head of the 322,000 Seventh-day Adventists in Jamaica and thousands more in the region. Both the prime minister and leader of the Opposition are devout Christians, despite the irony of the high correlation between church density and murder rate.

While I believe that decriminalising buggery is no big deal, I defend the right of the popular majority and less-accepted minority to express their views without recrimination. Did you know that in the United Kingdom, it can be inferred that anti-gay Christian or Islamic diatribe is hate speech and can be criminalised? However, in the US, free speech is protected, as long as instructions are not being given to harm anyone.

Thus, in a country that has had dozens of assassinations, including of sitting presidents Lincoln and Kennedy, the latter's presidential candidate brother Robert, and, of course, the iconic Martin Luther King Jr, it is legal to spew hatred of blacks. The First Amendment of the American Constitution protects free speech, which is why the racist and erstwhile murderous Ku Klux Klan, which is also anti-gay, is allowed to exist in the grand old US.

I'm just sick of the bad press and demonising of my country by stupid outsiders with unpatriotic locals collaborating. There is a viral video on the Internet regarding the homeless gays in New Kingston. For me, the only thing newsworthy about it is that Yvonne McCalla Sobers is showing great humanity by creating Dwayne's House, a charitable organisation to ameliorate their condition. Yet, a little British 'journalist' pricked our consciences, blowing on the fire, because he felt that his job in life was to do, like so many others in the foreign press, come here and show the worst.

Maybe he missed the log in his country's eyes. If you see UK statistics, you will realise that more than 40 per cent of the British homeless youth are gay. Of the 3,800 in New York, almost half are gay, yet the city only provides 250 beds in shelters. The percentage of gays among homeless is around the same in Canada. Amazingly, in America's gay capital, San Francisco, the number surpasses 50 per cent.

In 2010, an article in another newspaper by a sociologist-journalist discussed a 2006 study from the University of the West Indies, which showed an "... estimated 650 Jamaican adults and 800 ... children and adolescents without a permanent roof over their heads". Prior to that, there were several Gleaner stories about the number of homeless children and the horrors they experienced. In the same 2006 study, a Gleaner reporter, cited a 2006 Situation Analysis on Excluded Children in Jamaica study, which revealed that "2,000 children live or work on the street". What are we doing for homeless youth on the whole?

So, let us do some intervention, but let it be based on proportionality, truth and honesty.