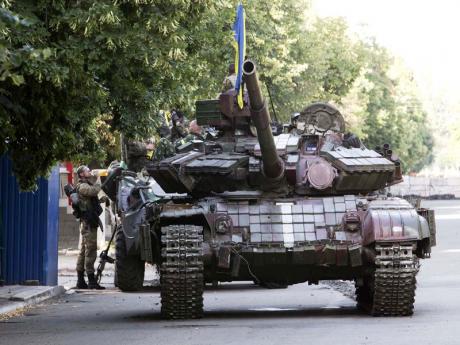 A Ukrainian Army tank stands in a central street in the city of Slovyansk, Donetsk Region, eastern Ukraine, yesterday. - AP

Ukraine's forces claimed a significant success against pro-Russian insurgents yesterday, chasing them from a key stronghold in the country's embattled east.

Rebels fleeing from the city of Slovyansk vowed to regroup elsewhere and fight on.

By late afternoon yesterday, Ukrainian troops were fully in control of rebel headquarters in Slovyansk, a city of about 100,000 that has been a centre of the fighting between Kiev's troops and the pro-Russian insurgents.

Soldiers raised the Ukrainian flag over the city council building, while troops carried stockpiles of weapons out of the city's administrative and police buildings, which have been under rebel control since early April.

Artillery fire on rebel forces began late last Friday and lasted into the night. Yesterday fighting could still be heard on the northern outskirts of the city.

The capture of Slovyansk represented the government's biggest victory since it abandoned a shaky ceasefire this week and launched an offensive against the separatists.

Until now, the Ukrainian army had often appeared feckless in the months-long campaign against the rebels.