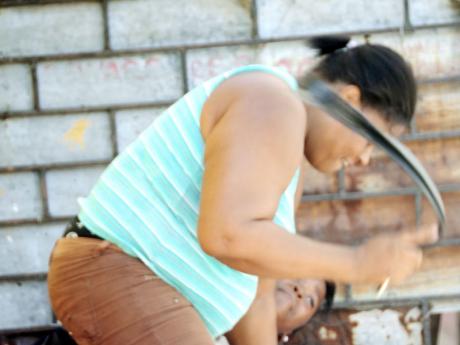 But now, international organisations, led by the United Nations Children's Fund (UNICEF), are arguing that the age-old practice is child abuse and should be outlawed.

But this is not going down well with scores of Jamaicans, who are stunned that what has been a cultural norm in nurturing the young is being deemed "violence against children".

For the average Jamaican parent, there is a big difference between violence or child abuse and punishing a child so he will know what is wrong or right.

Armed with the biblical stricture to "spare not the rod and spoil the child", many Jamaican parents argue that a slap on the hand or the buttocks does more good than harm to set their children on the straight and narrow.

Over the years, 'disciplinarians' in Jamaica have used a strap, a belt, or a whip to punish their children, while a single slap with the palm of the hand might be enough to elicit a wail or two out of a naughty toddler.

But for Marta Santos Pais, special representative of the United Nations Secretary-General on Violence Against Children, any form of physical contact of this nature is deemed violent.

"We know it's a cultural norm, but we believe in change," Santos Pais told a Gleaner Editors' Forum last Wednesday.

"But we realise that it takes time. We realise that when you get frustrated, the first thing that comes to your mind is to slap," added Santos Pais.

With spirited exchanges about the difference between abuse and punishment, Santos Pais agreed that Jamaica's historical background could have played a role in the seeming cultural norm where children are disciplined with lashes.

She said there could be a natural parallel with Jamaica and other countries, including those in Central America which were affected by civil war or unrest and the propensity to inflict pain.

Santos Pais was supported by Mark Connolly, UNICEF representative to Jamaica, who argued that corporal punishment could explain some of what is happening locally.

"The question has to be asked: why is there so much violence in Jamaica? … It's not one but a collection of factors, not the least of which is violence against children," said Connolly.

Santos Pais had previously noted that violence against children takes place in several settings, including areas where children should be safest - schools, care institutions, and homes.

"Like a contagion, violence spreads through communities and is transmitted to future generations," warned Santos Pais in a recent report.

The report stated that every year, and in every region of the world, millions of children suffer the cumulative impact of physical, mental and emotional violence, and millions more are at risk.

The executive summary of the Global Survey on Violence against Children, conducted under the auspices of Santos Pais, examines the measures in place around the world to ensure follow-up to the recommendations.

"Our efforts to end violence - whether state-sponsored or embedded in deep-rooted conventions or harmful practices - must start with the protection of our youngest citizens," said Santos Pais.

She noted that every child has the right to freedom from all forms of violence.

"This is not just common sense and basic morality; it is also an international legal obligation, as defined in the Convention on the Rights of the Child, the world's most widely ratified human-rights treaty.

"Without the threat of violence, girls and boys are free to develop their talents and skills to their full potential and shape their future," argued Santos Pais.

She added that the potential for positive change is enormous, but for now, violence remains a pervasive phenomenon that blights the life of millions of children.

"For countless girls and boys the world over, childhood is described by one word: fear," noted Santos Pais.

She warned that violence against children has serious and long-lasting consequences.

"It compromises child develop-ment and increases the risk of poor health, poor school performance, and long-term welfare dependency. It is often associated with poverty and deprivation, and acts as a brake on the potential of individuals and nations."

According to Santos Pais, violence against children is not inevitable. "Around the world, commitments are being made at the highest level to protect children from violence."

1 Set the right example for your child. Children learn by example. They watch you and follow what you do. If you set rules, you must also follow them.

2 Let your children help you as you set the rules for the family. Get them involved in deciding what is and is not acceptable, and what should be done when the rules are broken.

3 If your child does something wrong, give them a time out - that is, make them sit in a quiet place away from others. A time out gives you time to cool off and also gives the child time to think about his behaviour.

4 Taking away something the child likes is another option if your child has misbehaved.

5 Praise your child when he or she does well. Reward good behaviour and let your child know how proud he or she makes you when they behave well.

6 Spend time with your children. Get to know them. Communicate with them. Try to find out what their concerns and problems are. Encourage them to speak freely with you.

7 If you feel that parenting is challenging and that you cannot provide discipline for your child, please seek help.