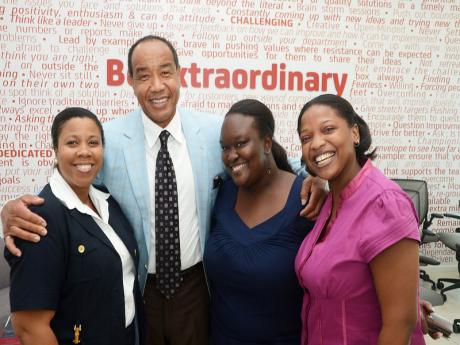 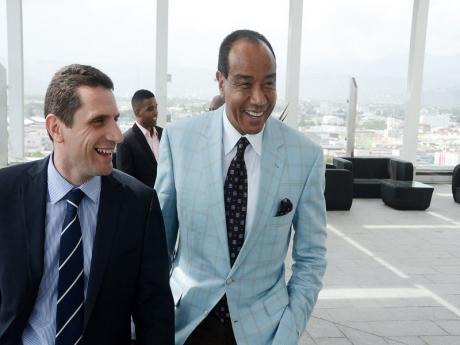 NCB Chairman Michael Lee-Chin (right) and General Manager for Digicel Business Jason Corrigan share a laugh on the roof at the Digicel headquarters ahead of Lee-Chin's inspirational leadership talk at the telecommunications company.
1
2

'Ships are safest in the harbour but they aren't meant to stay there'.

When Michael Lee-Chin stepped into the room, an eager group of Digicel team leaders knew they were in for a special treat. For the next 40 minutes, the Portland-born National Commercial Bank chairman walked them through his journey in leadership, and pinpointed for them the keys to success in business. When he was finished, the group was buzzing with energy.

Lee-Chin first dispelled the notion that individuals had to have a mind-boggling IQ or inside information to succeed. Instead, he itemised some of the keys to success. With the Digicel team listening intently, he listed reputation, differentiation, a client-centric mentality, integrity, intelligence, and passion as the tools needed. He said leaders should test the decisions they make with the following questions: "How is my behaviour now going to enhance my reputation? How will it affect my reputation with my family, my company and my country?" He also noted that "leading by example is the highest form of leadership".

In a wide-ranging yet focused address, he said that great leaders take a long-term approach to decision making and that they recognise that their behaviour today is their history tomorrow. He revealed that his work is based on strong principles of openness, honesty and excellence, and that while he can't foresee the future, those principles give him confidence in tough situations.

Continuing, he pointed to the need to differentiate products and services as a key area for truly serving customers. He urged the young leaders to prepare to swim upstream and avoid complacency, warning that complacency breeds arrogance and arrogance leads to failure.

Near the end of a presentation filled with inspirational examples from his own leadership journey, Lee-Chin said successful people are role models and catalysts for entire generations and risk takers.

Furthermore, everyone should seek to fulfil their potential. To bring home the point, he invoked the image of a ship at harbour saying, 'ships are safest in the harbour, but they aren't meant to stay there'. The respected international businessman and philanthropist humbly thanked his mother for urging him on with her high expectations.

The Digicel Extraordinary Leadership Lecture Series began last June and has included presentations from national leaders, including Thalia Lyn of Island Grill, Christopher Barnes of The Gleaner and Richard Byles of Sagicor, among many others.