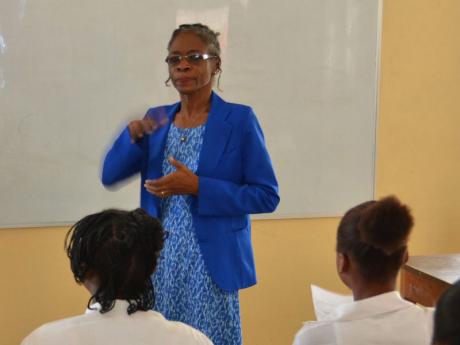 Teen mothers who attend the Women's Centre of Jamaica Foundation (WCFJ) classes in the Corporate Area and St Catherine are hoping that when they return to school after the summer holiday, the Jamaica Urban Transit Company (JUTC) will correct the problem which sees some bus crews demanding adult fares from them.

Under the rules of the JUTC, these students, some attending classes with obvious signs of pregnancy, are also to enjoy the concession fare of $20, but that is being ignored by some bus crews.

For Nadine Fagan whose 14-year-old daughter attends the WCFJ school in Spanish Town, St Catherine, it is a daily problem to commute on the JUTC buses, as she is required to pay the adult fare of $100.

"Whenever she is taking the JUTC bus, they tell her that she needs to pay the adult fare because she is an adult, even though she is in her school uniform," said Fagan.

"The other day, she gave the driver $20 and he told her that she needs to pay the adult fare because she is a big woman, and what makes it worse is when they say that because she has a child she is an adult," added Fagan.

It is a problem which acting executive director of the WCFJ, Dr Zoe Simpson, wants to see corrected by the end of summer.

"It must be tough on the girls to be asked to pay an adult fare regardless of them being teens; and with the expenses they are already faced with," said Simpson.

"We are aware of the situation and are planning a meeting with the JUTC to address the problem," Simpson told The Sunday Gleaner, as she noted that the bus crews ignore the fact that the girls are in their school uniforms.

However, communications manager at the JUTC, Clinton Clarke, is struggling to determine why adult fares are being demanded from these minors.

"If the young ladies at the women centre are under the age of 20 years of age and are wearing uniform, then it makes them qualified," added Clarke.

He said one option for these students would be to purchase and use bus cards, which would be preprogrammed as to how much money should be deducted.

"What we are doing now is to encourage all the concession passengers to access the concession fares through the use of their bus cards, and if the students at the university are in uniform and are under the age of 20 years, then they should be paying the concession fare," declared Clarke, as he indicated that the JUTC would be willing to meet with the administrators of the WCFJ to resolve the issue.

The WCFJ is a government agency mandated to provide continuing education for adolescent mothers.

Its programme includes academic instructions in tandem with the curriculum of the Ministry of Education. The WCFJ now falls under the Office of the Prime Minister, but steps are in place to register it with the education ministry.

"Once the registration of the WCFJ as an educational institution under the education ministry is complete, the adolescent mothers will be issued with identification cards which, like other students, they will present as they board the JUTC buses," shared Simpson.