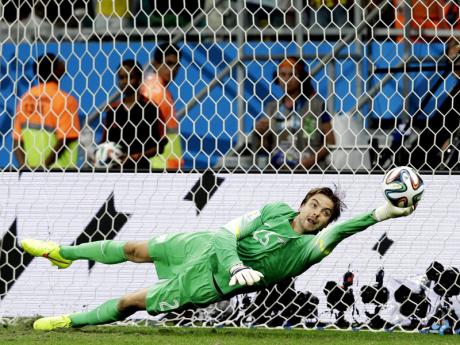 Netherlands' goalkeeper Tim Krul saves a penalty kick during the World Cup quarter-final match between the Netherlands and Costa Rica at the Arena Fonte Nova in Salvador, Brazil, yesterday. The Netherlands won 4-3 on penalty kicks. - AP

Tim Krul came on as a substitute in the final minute of extra time and then saved two penalties in a 4-3 shoot-out victory over Costa Rica yesterday, giving the Netherlands a spot in the World Cup semi-finals.

"We had a lot of chances, but it didn't go in," Krul said on Dutch television. "Then I come in, stop two penalties, and here we are."

In another stroke of tactical genius at this year's World Cup, Netherlands coach Louis van Gaal pulled Jasper Cillessen moments after the Ajax goalkeeper had saved a shot from Marcos Urena in extra time.

"The trick is good," said Krul, who plays for Newcastle. "A lot of preparation went into it."

The Dutch team will next face Argentina in the semi-finals on Wednesday in Sao Paulo.

Krul looked super confident during the shoot-out at the Arena Fonte Nova, saving the second and fifth penalties by diving to his left and sticking out his hand.

When Krul stopped Ruiz's penalty, Cillessen, watching from the sideline, punched the air in celebration.

When he saved the second to win the match, Cillessen out-sprinted the rest of the bench to get to Krul, who was already being mobbed by jubilant teammates who had watched from the halfway line.

Costa Rica goalkeeper Keylor Navas had kept his team in the match with a string of great saves in the first half, and again in extra time. When Wesley Sneijder twice beat him late in regulation and again in the second half of extra time, the woodwork made the stop.

Sneijder hit the post with a free kick in the 80th minute, and sent a curling shot over Navas and off the crossbar before the penalty shoot-out.

At the end, however, Navas could not stop any of the four Dutch penalties as veterans Robin van Persie, Arjen Robben, Sneijder, and Dirk Kuyt all scored.

The Krul substitution will only boost Van Gaal's reputation as a coach who leaves nothing to chance and who has a golden touch with replacements. And it kept his tenure with the Netherlands alive for two more matches before he becomes the manager at Manchester United next season.