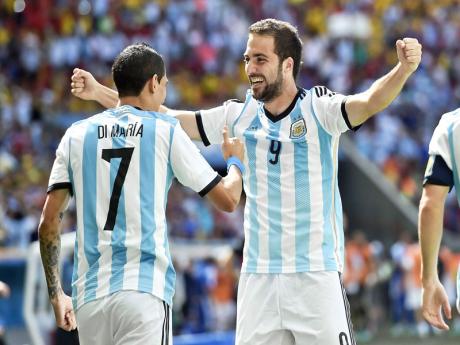 Argentina's Gonzalo Higuain (right) celebrates with Angel di Maria after he scored what turned out to be the winning goal against Belgium in the World Cup quarter-final match at the Estadio Nacional in Brasilia, Brazil, yesterday. - AP

For once, Lionel Messi didn't carry Argentina on his shoulders.

He didn't have to.

Gonzalo Higuain ended a four-game scoreless streak with an early winner as Argentina beat Belgium 1-0 and reached a World Cup semi-final match for the first time since 1990.

"Since the first game of this World Cup, I said I was calm, that the goals would come. It came, and at an important moment," Higuain said. "It's been so many years since we made it to the semi-finals. Now we did."

Higuain came into the World Cup still recovering from an ankle injury that had sidelined him since early May. The 26-year-old Napoli striker looked out of form in the group stage, and wasn't giving Argentina the edge they needed in the penalty area.

That changed in the eighth minute of the game in Brasilia, as he picked up a deflected pass from Angel Di Maria just inside the area and beat goalkeeper Thibaut Courtois with a half-volley toward the far post.

"Higuain has the class to put the ball where he wants it. There is nothing we could do about it," Courtois said.

A poor consolation for the Belgium goalkeeper was that he once again kept Messi from scoring, as he had done in seven straight matches at club level.

The Argentina captain missed a chance to get his fifth goal of the tournament when he failed to beat Courtois in stoppage time.

Buoyed by the melodic chants of their fans, Argentina protected their lead thanks to a near-flawless defensive line, bolstered by strong performances from central midfielders Javier Mascherano and Lucas Biglia.

Belgium lacked the imagination to find a way into the final third of the pitch, and created few clear chances, apart from a pair of headers by Kevin Mirallas and Marouane Fellaini.

Belgium's most creative player, Eden Hazard, had little impact on the game beyond receiving a yellow card for a studs-first challenge on Lucas Biglia. Hazard cut a disconsolate figure, as he was substituted by Nacer Chadli in the 75th.

"If we had equalised in the last few minutes, they are dead, they are finished," Wilmots said.

"They played an excellent match," Argentina coach Alejandro Sabella said of his team. "After 24 years, we can be among the four best teams in the world. At least we lived up to the minimum objective."