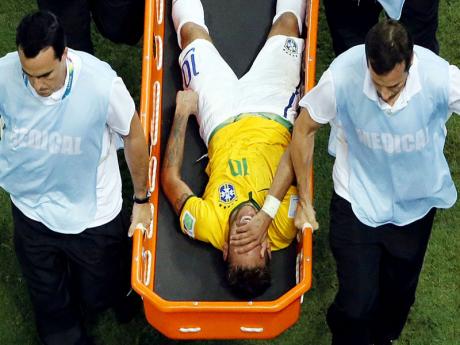 Brazil's Neymar lies inside a medical helicopter at the Granja Comary training centre, in Teresopolis, Brazil, yesterday. Neymar was airlifted from Brazil's training camp and will be treated at home for his back injury. - AP

Brazil star Neymar says his World Cup may be over because of a fractured vertebra, but his World Cup dream of celebrating the title with his teammates at the Maracana Stadium next Sunday is still alive.

In a video released by the Brazilian football confederation yesterday, Neymar thanked fans and everyone else for the support in this "very difficult moment."

"I don't have words to describe what has been going through my head and my heart," said Neymar, trying to stay upbeat, but still sporting a subdued look on his face. "I just want to say that I will be back as soon as possible. When you least expect, I'll be back."

Wearing a black T-shirt and a black hat turned backward, he spoke in a low tone of voice, his eyes still heavy.

"My dream is not over yet," he said. "It was interrupted by one move, but it will continue and I'm certain that my teammates will do whatever possible so I can fulfill my dream of being a champion. I won't be able to fulfill the dream of playing in a World Cup final, but I'm sure they will win this one, they will become champions, and I will be there with them, and all of Brazil will be celebrating together."

It was the first time Neymar had spoken publicly since fracturing a vertebra late in Brazil's 2-1 win over Colombia in the quarter-finals on Friday.

The video was made just before the striker was airlifted from Brazil's training camp in a medical helicopter to be treated at home for the back injury that ruled him out of the last two games of the World Cup.