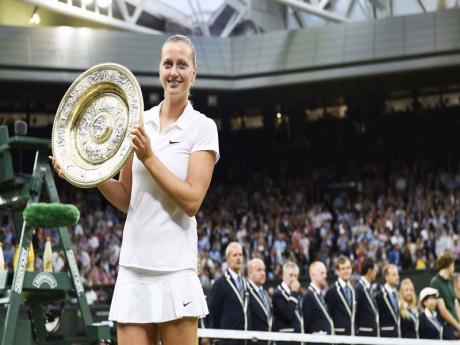 Petra Kvitova of the Czech Republic holds up the trophy after winning the women's singles final at Wimbledon, London, yesterday. - AP

Petra Kvitova plays so much better at the All England Club than anywhere else, and now she owns two championships to prove it.

In one of the most dominant performances in a women's final at Wimbledon, the sixth-seeded Kvitova of the Czech Republic overpowered and overwhelmed 13th-seeded Eugenie Bouchard of Canada 6-3, 6-0 in only 55 minutes yesterday, to add to her 2011 title at the grass-court Grand Slam.

"I know," Kvitova said, "this is the best tournament for me."

Absolutely true. Her career record of 26-5 at Wimbledon translates to an .839 winning percentage, compared to her marks of .667 at the three other majors and .681 at all other events.

In 2014, Kvitova lost in the first round at the hard-court Australian Open, and in the third round at the clay-court French Open. But get her on the grass court, and those speedy serves and flat forehands really shine.

"For sure, she was on," Bouchard said. "We know that when she's on, she's very tough to beat. Especially on this surface."

Yesterday, the 24-year-old Kvitova certainly was "on". Oh, was she ever. Pretty much perfect in every way.

The left-hander hit serves that reached 113 mph (182 kph) and earned easy points. Walloped big, deep returns that left Bouchard little time to react. Smacked flat groundstrokes off both wings that zipped right where she intended, often skidding near lines, helping accumulate a 28-8 edge in winners. Won 11 of 14 points she played at the net.

Most surprisingly, even to Kvitova herself, was the way she motored around the Centre Court grass with her right thigh heavily bandaged, displaying defensive skill that she's not necessarily known for. It was telling that Bouchard lost in such a lopsided manner, despite four unforced errors.

"I mean, (a) few shots was really incredible, and I really couldn't believe that I made it, actually," said Kvitova, who was within two points of defeat against Venus Williams in the third round. "I said, 'Oh, my God, this is good!'"

The previous time a runner-up won only three games in the Wimbledon final was 1992, when Steffi Graf beat Monica Seles. Before that, it hadn't happened since 1983, when another Czech lefty, Martina Navratilova, defeated Andrea Jaeger.

Just 10 times in the history of a women's tournament first played in 1884 has a champion ceded fewer games in the final than Kvitova did.