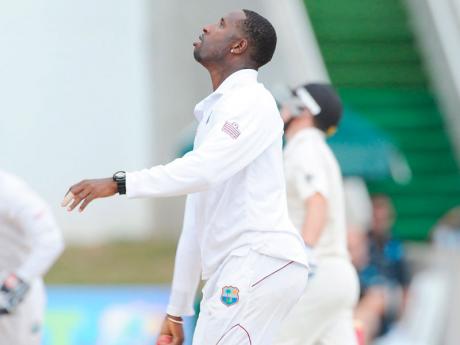 West Indies cricket continues to amaze, and it continues to do so to those who are blinkered and refuse to see, or cannot see, the shortcomings of the regional game.

The shortcomings of the regional game, the quick fix method to the problems, the selections of some of the teams, and the failure of the team to win were exposed once again in the defeat to New Zealand in the just-concluded series.

After losing the first Test at Sabina Park, the West Indies dropped a few players, recovered to win the second Test at Queen's Park Oval, and then, with everything set for an exciting finish at Kensington Oval, dropped a player who had done well on his Test debut and limped to a disappointing loss in a rain-shortened game.

For too long, for loss after loss, those in charge of cricket in the West Indies talk about the things they need to do for the next match. Managers, coaches, captains, and senior players all talk about the need to focus, to concentrate, to fight, and to do all kinds of things.

They never once talked about the quality of the players available, those who look good, but seldom performed, those who reel off a few shots against good deliveries, but not enough of them, and those who are selected time and time again despite not making runs or not taking wickets, those who are constantly "promising" players, maybe the next Garry Sobers or the next Viv Richards.

They are always making sweet-sounding excuses, and they are always talking about batting longer and about bowling a better line and length as if they are the easiest things to do, and making centuries and taking a handful of wickets, which they did. And then they return the next day and do the same things all over again.

George Headley, the great 'Maas George', used to say, over and over again, that a man is allowed one mistake, and that when he makes that mistake two or three times, it is no longer a mistake.

The managers and captains, etcetera, etcetera, never once talked about the things that are important in order to improve and to develop one's skill, one's self. They never ever talked about the level of cricket in the region, the need for a good, strong tournament of reasonable length, of a tournament reserved for the territories, for the best players, and for the presence of good pitches on which to learn their craft.

They never talked about the quality of coaching around the territories, they never talked about how a player gets into the High Performance Centre and what happens there, and it matters little to them who the West Indies Board choose to be selectors, whether or not they are qualified to do the job and if they are respected by the people.

The time has come for things to happen, for the people to ask questions, and intelligent questions at that.

He may or may not be a good coach, but he certainly cannot make blood out of stone, even though he too can stop making excuses for the players.

The people must first of all elect people of quality to run the affairs of cricket at all levels, they must ask questions about the quality of cricket that is being played throughout the region, about the level and quality of cricket that is being played in Jamaica, and they also must hold on to the right to remove people from office who they do not believe are working tirelessly for cricket, and nothing but cricket, apart from their substantial careers.

West Indies cricket has been going through many changes over the years, it has seen many changes in recent years, and it is hoped that some of those planned for next year, including a league void of the Combined Campuses and College, a league of return matches, and payment to first-class cricketers, will remain for a long, long, long time.

West Indies cricket needs some serious thinking. Why, for example, did the West Indies, a team weak in batting, play five batsmen and five bowlers in Barbados?

Was it a case of once again fooling themselves, of believing, despite the facts to the contrary, that their batting was strong and their bowling weak?

Why did the West Indies omit Jermaine Blackwood, a debutant who had scored 63 a few days earlier at Queen's Park Oval, and bring in Shillingford, the bowler with a suspect action and one who had been dropped after not taking a wicket in his previous match at Sabina Park?

It was true that the team needed a fifth bowler, but it did not need a fifth specialist bowler. The team needed an all-rounder. It needed one of its batmen to be a bowler, and with Gayle not inclined to bowl these days, West Indies cricket is short of such a man.

This is one of the things that West Indies cricket needs to look at. It needs to find a cricketer, an all-rounder, not so much like Garry Sobers, but one that can bat as well as bowl and field.

The sad truth is that based on overall performance in a Test match, West Indies cricket is struggling. Shivnarine Chanderpaul and possibly Christopher Gayle should have been gone by now but for the paucity of good players. And the same is true for one like Shane Shillingford, whose action is suspect, thereby preventing him from bowling the doosra, his main attacking weapon.

The reality is that it is difficult to do without them, and especially without Chanderpaul and Gayle.