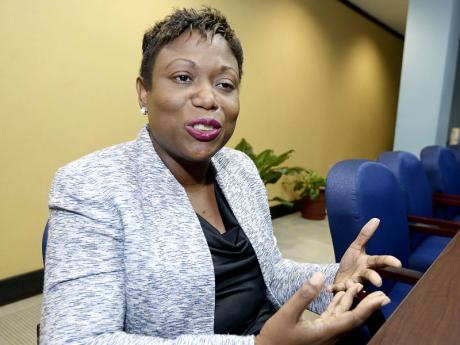 For more than 20 years, Rosemarie Henry has been making a difference in the lives of many through her outstanding community service. Children, the elderly, as well as support services to the Kiwanis Club are a major part of Henry's life. To add to her plate, Henry was recently appointed to serve for two years as the vice-chair of the Financial Inclusion Sub-Committee for the International Association of Insurance Supervisors (IAIS).

The IAIS is a voluntary membership organisation of insurance supervisors and regulators. Its objectives are to promote effective and globally consistent supervision of the insurance industry in order to develop and maintain fair, safe and stable insurance markets for the benefit and protection of policyholders; and to contribute to global financial stability. However, Henry will be doing some slight adjustments to her new position, she told Flair, "I will be taking the standards that have already been set, and using those to regulate the industry. I am now on the flip side, where I will be a part of the committee that actually sets the standard, so I will use the experience I have to make the difference in the Caribbean."

An accomplished professional at the Financial Services Commission (FSC), as the senior director of Insurance with responsibility for regulatory supervision of the insurance industry, Henry describes the appointment as a stepping stone that has taken her out of her comfort zone, "It has been great. It gives me the opportunity to use the other side of my brain. Normally, I would be in the private sector and now what it does is allow me to take that knowledge from there and move it into the regulatory side, and it works quite well," she states.

Henry doesn't mind the demands of her job because she actually loves what she does. "I am not just working. I am actually having fun because I enjoy what I do. When I am not reading or cooking, I am usually working. I have not been out partying very often these days, but I love the movies. My work takes up a bit of my time and, when I am not at work, I am at Kiwanis," she explains.

Her mother is a major source of encouragement who supports whatever she does. She told Flair that her mother always encourages her to stay true to herself and make sure that wherever she is, that's where she wants to be. Henry is doing something that she loves and enjoys.

She also finds her volunteerism very fulfilling. She shared her most memorable experience with Flair which happened at the Maxfield Park Children's Home. She noted that, when her Kiwanis group visited the home, there was one baby who would not stop crying despite several attempts by staff and volunteers to comfort him. She noted that, as soon as she took the baby and cuddled him in her arms, he immediately stopped crying. She told Flair that that confirmed that she was indeed called to do what she was doing.

Being very passionate about what she does in her professional life, she encourages others to do what they love, instead of doing something just because it pays. She also takes her volunteerism very seriously and believes that, when you give of yourself, it will all come back to you. "Find something you are truly interested in and just do it," she suggested.

Henry is not worried about the number of things she has on her plate, because she has the opportunity to pull from each; they are all connected.

What about a family?

"Anything is possible in life. From I was younger, I decided that one day when I settle down I would like to adopt. There will be always be a child to adopt," she concluded.