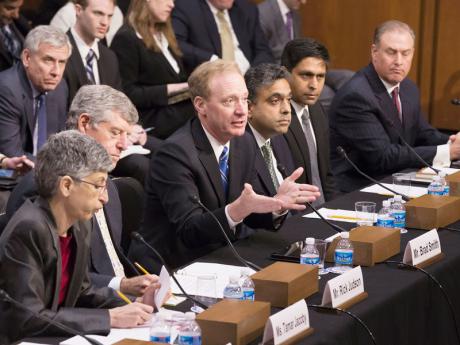 In this file photo, the Senate Judiciary Committee holds a hearing, on Capitol Hill in Washington, on immigration reform after a bipartisan group of senators agreed on legislation that would dramatically remake the US immigration system.

Kelly Parker was thrilled when she landed her dream job in 2012 providing tech support for Harley-Davidson's Tomahawk, Wisconsin, plants. The divorced mother of three hoped it was the beginning of a new career with the motorcycle company.

The dream didn't last long. Parker claims she was laid off one year later after she trained her replacement, a newly arrived worker from India. Now she has joined a federal lawsuit alleging the global staffing firm that ran Harley-Davidson's tech support discriminated against American workers, in part by replacing them with temporary workers from South Asia.

The firm, India-based Infosys Ltd, denies wrongdoing and contends, as many companies do, that it has faced a shortage of talent and specialised skill sets in the US. Like other firms, Infosys wants Congress to allow even more of these temporary workers.

But amid calls for expanding the nation's so-called H-1B visa program, there is growing pushback from Americans who argue the program has been hijacked by staffing companies that import cheaper, lower-level workers to replace more expensive US employees, or keep them from getting hired in the first place.

"It's getting pretty frustrating when you can't compete on salary for a skilled job," said Rich Hajinlian, a veteran computer programmer from the Boston area. "You hear references all the time that these big companies ... can't find skilled workers. I am a skilled worker."

Hajinlian, 56, who develops his own web applications on the side, said he applied for a job in April through a headhunter and that the potential client appeared interested, scheduling a longer interview. Then, said Hajinlian, the headhunter called back and said the client had gone with an H-1B worker whose annual salary was about $10,000 less.

"I didn't even get a chance to negotiate down," he said.

The H-1B program allows employers to temporarily hire workers in specialty occupations. The government issues up to 85,000 H-1B visas to businesses every year, and recipients can stay up to six years. Although no one tracks exactly how many H-1B holders are in the U.S., experts estimate there are at least 600,000 at any one time. Skilled guest workers can also come in on other types of visas.

An immigration bill passed in the U.S. Senate last year would have increased the number of annually available H-1B visas to 180,000 while raising fees and increasing oversight, although language was removed that would have required all companies to consider qualified US workers before foreign workers are hired.