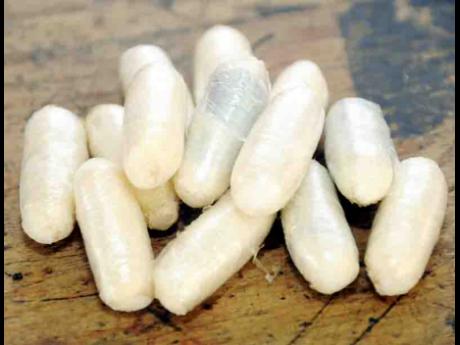 These are cocaine pelets. Many Jamaicans swallow these in an attempt to sidestep checks at international ports of entry. - File photo

A Jamaican policeman who was kicked out of the force after being convicted of fraud is now before the courts in the United States on drug charges.

Errol Cliff Richards, who once ruled the streets of downtown Kingston under the moniker 'Schoolboy Richie', is now facing the United States District Court in the Southern District of New York on charges of conspiracy to distribute narcotics and attempt/conspiracy for narcotics importation/exportation.

Court documents obtained by The Gleaner show that a sealed indictment was entered into the court on March 20 of this year.

The indictment was unsealed on June 19 when Schoolboy Richie and his co-defendant, Ronald Mohammed Noeranie Badloe, waived pretrial report proceedings.

On June 23, the court gave the prosecutors until July 14 to complete discovery and set September 2 as the date for a pretrial conference.

According to the indictment, from at least 2012, in Colombia and elsewhere, Schoolboy Richie, Mohammed and "others known and unknown intentionally and knowingly did combine, conspire, confederate and agree together and with each other to violate the narcotics laws of the United States".

It is further alleged that on or about October 25, 2013, Badloe attended a meeting in Bogota, Colombia, where he and others discussed the transportation of hundreds of kilograms of cocaine from Venezuela to the US, with a portion of the cocaine to be shipped to Canada.

The prosecutors further charge that in January, Schoolboy Richie and Badloe attended a meeting in Trinidad where they discussed the transportation of hundreds of kilograms of cocaine from Mexico to the US with a portion of the cocaine to be shipped to Canada.

According to court documents, on or about February 14, a conspirator, not named as a defendant, delivered approximately US$109,900 to another individual in New York as payment for approximately 20 kilograms of cocaine.

The prosecutors have also asked the court to allow the forfeiture of all property the two accused may have acquired from their drug deals.

Schoolboy Richie had faced the local court system in 1996 when he, his girlfriend Janice Bernard and then Superintendent of Police Owen Ellington were arrested on a charge to defraud an insurance company of $450,000.

Ellington was freed on a no-case submission at the end of the Crown's case on September 10, 1998, while Richards and Bernard were convicted of defrauding the insurance company. They were each sentenced to 12 months' imprisonment, which they served after they lost their appeals in June 2001.

He contended at the time that the arresting officer, acting in the course of his employment, maliciously and without reasonable and probable cause laid the information against him.

He argued that the arresting officer ignored the fact that there was no evidence implicating him in any conspiracy to defraud the insurance company, and when he was charged, it was patently clear that he had invested his legal and beneficial interest in the car at the centre of the controversy from about April 1995.

The attorney general contested the lawsuit on the grounds that the prosecution was not malicious and contended there was reasonable and probable cause to effect the arrest and that the then director of public prosecutions had ruled that Ellington, Richards and Bernard should be charged.

Ellington was not successful in the lawsuit but, having been freed of the criminal charge in the earlier case, his meteoric rise in the force continued, culminating in his appointment to the job of top cop in 2010.

Last week, the national security ministry announced Ellington's retirement - citing his desire to separate himself from the force ahead of the upcoming commission of enquiry into the deadly 2010 operation in Tivoli Gardens, west Kingston as well as to allow the Independent Commission of Investigations freedom to probe allegations of death squads within the force - signalling the end of that tenure.