Crayons Count will do it again 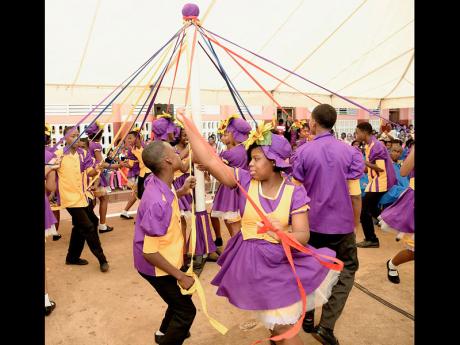 Members of the New Forest performing arts group do their gold medal-winning Maypole dance during the 2014 graduation ceremony last Wednesday. Funds were raised during the ceremony to pay the $75,000 that was owed for the costumes. - Ian Allen/Staff Photographer

Deika Morrison, founder of Crayons Count and Do Good Jamaica has announced that due to the generosity of National Baking Company, all early- childhood institutions will again get a standard set of learning materials for the 2014-15 academic year. "Orders have been placed for arrival in the summer and packaging of the kits in September," she said.

Since its inception, Crayons Count has delivered books, crayons, puzzles, puppets, play dough, blocks, paint, scissors, glue sticks, and more, to some 2,600 early-childhood institutions in every community in the island.

Morrison was addressing the 2014 graduates of New Forest Primary, Junior High and Infant School on Wednesday, July 2. But, Morrison also recommended to her audience that they use seven simple principles as they work together to achieve greatness beyond the quiet Manchester community where she was guest speaker.

The seven principles outlined by Morrison are:

1. Decide on the tangible outcome you want to achieve.

3. Make it easy to help and let people know their contributions are equally valuable.

4. Encourage people to do what is best for them and encourage then to come up with their own ideas of how to meet the goal.

7. Star power is very useful - use it wisely.

Morrison explained how the above seven principles had helped her and Jamaican Rotarians make a new Guinness world record for the most books donated to a charity in seven days. "Using the same seven principles we embarked on Crayons Count, which has successfully provided learning tools for every Jamaican early-childhood institution that has applied for registration with the Early Childhood Commission," Morrison told the eager graduates as they listened to her experiences.

But what most of the audience related to was how Morrison and her team used the seven principles to galvanise much of the support in Jamaica and the world that helped Tessanne Chin win The Voice last year.