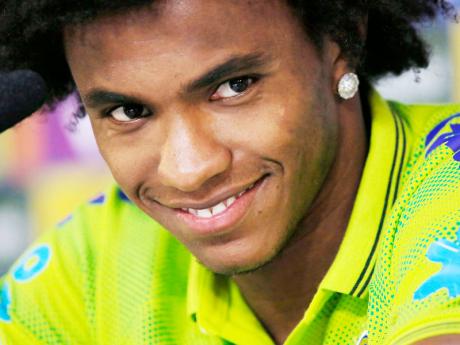 Brazil's Willian smiles as he listens to a question during a press conference at the Granja Comary training centre in Teresopolis, Brazil, yesterday. - AP

Still coping with the loss of their biggest star, the Brazilians are trying to find ways to remain upbeat about their prospects at the World Cup.

The medical helicopter that took Neymar home with a back injury also carried away much of the country's hopes for a sixth world title, but the tournament isn't over yet and Brazil are just a day away from a difficult semi-final against Germany.

"We have to try to be mature in a moment like this," Brazil defender David Luiz said. "We are sad because we are missing an important player and someone who was trying to fulfill his dream of winning this title."

One of the tournament's main attractions, Neymar, had been decisive for Brazil until the devastating injury late in the team's 2-1 win over Colombia in the quarter-finals on Friday. He was crucial on the field and an essential part of the group trying to win the title at home. He was seen as the joyful youngster who was admired and respected by everyone.

A meeting with the team's psychologist was scheduled with the players yesterday to discuss the striker's absence.

"We will talk about what needs to be done to make sure the players understand that we can still win the World Cup despite of what happened," Brazil coach Luiz Felipe Scolari said.

Brazil doctor Jose Luiz Runco said the players were "shocked and saddened" when they heard Neymar would miss the rest of the World Cup.

"It's sad because we know how hard he worked to be here with us," striker Fred said. "We know how important he was for us. But we have to look at our group and realise that it still has a lot of quality."

Everyone knows it won't be easy replacing Neymar. Brazil thrived when he played well and struggled when he didn't live up to expectations.

"It's difficult to lose a player who is so crucial to our team," veteran right back Maicon said.

The team's other forwards have been struggling since the competition began and nobody else in the squad has the characteristics of the Barcelona star.

Instead of using reserve strikers Bernard or Jo, it's likely that Scolari will pick one of his midfielders to play in the match against Germany tomorrow in Belo Horizonte. Willian, Hernanes and Ramires are the most probable options.

Making matters worse for Scolari is the fact that captain and central defender Thiago Silva will also be missing because of a yellow card suspension.

"We don't know who is going to come in, but we know that we have a lot of quality players in

our squad," Silva said. "We are sad for Neymar and because I'm not going to play, but we have to be prepared despite these absences."

One way for Brazil to try to stay positive may be to look to their past.

It's not the first time Brazil's national team lost its best player to injury during the World Cup. It happened to Pelé and Brazil still won the title.

"I was also injured during the 1962 World Cup in Chile and I was out for the rest of the tournament," Pelé said. "But God helped Brazil continue on to win the championship."

When Pelé hurt a muscle in the second match of the tournament in Chile, most in Brazil said the chances of a world title had diminished significantly. But the team won its next four matches to clinch its second consecutive trophy.

"I hope the same will happen with our Selecao in this World Cup," Pelé said.