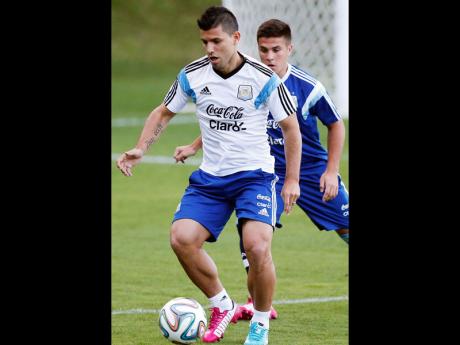 Argentina midfielder Angel Di Maria has been ruled out of the World Cup semi-final against the Netherlands with a thigh injury, while striker Sergio Aguero has been declared fit to play after recovering from a similar problem.

Di Maria limped off the field in the first half of Argentina's quarter-final win over Belgium after straining a muscle in the back of his right thigh.

Team doctor Daniel Martinez yesterday said tests showed it was a "first-degree" strain - the mildest kind, but added that Di Maria wouldn't be fit to play in Wednesday's semi-final.

Martinez said Aguero, who sustained a similar injury 10 days ago, had recovered in an "excellent" way.

Losing Di Maria is a big blow for Argentina as they prepare for their first World Cup semi-final since 1990. Besides Lionel Messi, he's been the team's most influential player in Brazil.

Di Maria scored the extra-time winner against Switzerland in the second round and set up Gonzalo Higuain's winning goal in the first half against Belgium on Saturday.

"He's a key player in this project," Higuain said of Di Maria. "We hope that he will be ready as soon as possible because we know what he does for the team."

Sabella also praised Messi's performance against Belgium, even though he didn't score. The four-time World Player of the Year started the move that resulted in Higuain's goal, pirouetting past two Belgium players before giving the ball to Di Maria whose pass deflected off a defender into Higuain's path.

"Messi, I feel that he played a wonderful match because it is not only scoring goals," Sabella said. "It is bringing together three opponents and to see if you can give the ball to a teammate to move forward in the pitch. Every move he makes is a sign of hope for us and it endangers the opponent."