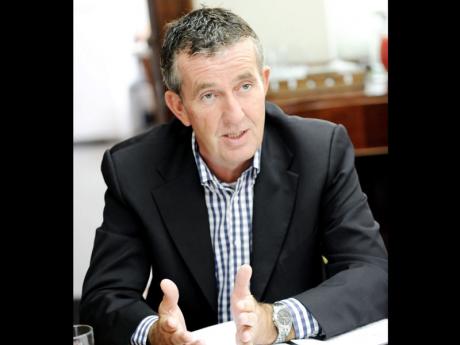 Justin Felice is a British policeman. In Jamaica, by all accounts, he has done a first-class job of improving our investigatory capabilities.

Unlike many local policemen, he impresses me as an honest man. In our constabulary, that's as rare as a double-yolked egg. For example, in the celebrated Forbes-Vaz-Bicknell case, he was brave and loyal to Jamaica in his efforts to obtain a statement from Commissioner Owen Ellington, which the prosecution needed. This led to a public rebuke from Ellington, who said on national television that no junior officer could force him to give any statement. For this and other transgressions, I've called for Ellington's resignation in the past. His sudden departure and evasive explanation will draw no crocodile tears from me.

More on that anon. Today, I must advise Justin Felice, a policeman I admire, to stick to police work and leave law, especially constitutional law, to qualified analysts. I thought the intent and application of 'Silent coup against lawyers' (Gleaner, July 1, 2014) was clear. But, in a response deserving an award for the decade's most irrelevant waste of newspaper space, 'No silent coup, Mr Robinson' (Sunday Gleaner, July 6, 2014), Felice relies on United Kingdom (UK) court decisions and UK statutes to establish that "there's thus no 'silent coup against lawyers' in Jamaica. On the contrary, much more should be done by Jamaican lawyers to actively fight the scourge of money laundering and its predicate crime of tax evasion ... ."

But we're no longer UK subjects, nor are we living in the UK. We're Jamaican citizens, whose statutes are subject to a written Constitution (similar to another former colony, Canada), and whose citizens are guaranteed certain fundamental rights and freedoms with which no Queen, no Government and definitely no policeman dare interfere.

Mr Felice bases his above conclusions on: "Under UK law, a lawyer is obliged to comply with the statutory requirements in relation to customer due diligence, including identification, verification and record keeping, prescribed by the Money Laundering Regulations 2007, when this lawyer acts as 'an independent legal professional'. This is required on a 'risk-sensitive' basis, but the statutory obligation to report suspicion of money laundering isn't subject to any limitation or qualification."

(i) protection from search of the person and property;

(ii) respect for and protection of private and family life, and privacy of the home; and

(iii) protection of privacy of other property and of communication;"

"(r) the right to due process as provided in Section 16;"

"16(1) Whenever any person is charged with a criminal offence, he shall, unless the charge is withdrawn, be afforded a fair hearing within a reasonable time by an independent and impartial court established by law.

(2) In the determination of a person's civil rights and obligations or of any legal proceedings which may result in a decision adverse to his interests, he shall be entitled to a fair hearing within a reasonable time by an independent and impartial court or authority established by law."

No judiciary can be independent by itself without an equally independent Bar to present and argue cases before it. It's this critical underpinning of a free society that was recently recognised by British Columbia's appeal court. Frustrated policemen, anxious to punish every miscreant, mustn't lose sight of the fundamental principle that it's better for 1,000 guilty men to go free than one innocent be convicted.

A constitutional guarantee of 'due process' can't be delivered if accused citizens' lawyers incriminate their own client. A constitutional right of innocence until proven guilty can't survive if lawyers assist incompetent investigators by disclosing information on 'suspicious' transactions received in confidence.

On a pragmatic note, the UK, where Mr Felice learned his policing, has no 'informer-fi-dead' culture. Presumably, he's OK with investigating sudden increases in murdered lawyers. I guess that'll just be regrettable consequences of lawyers' 'duty' to "fight the scourge of money laundering".

It's police duty to investigate crime and prosecutors' duty to prove property illegal. What next? Parents must inform on children? Husbands and wives on each other? Ugh!