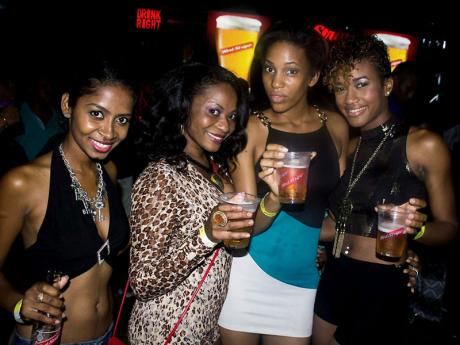 Patrons enjoying the vibes at Absinthe.

Hosted at Hope Gardens on Sunday, Absinthe kicked off the summer in fine style with a premium party experience.

The party commenced at 2 p.m., and saw many patrons turning out early in order to get the full value for their money. The musical juggling was handled by ZJ Johnny Cool, DJ Sanjay and Coppershot, and with hip hop, dancehall, reggae and pop music on hand, patrons were thoroughly entertained.

The event was Red Stripe beer-inclusive, however, the option to purchase premium beverages at the bar was also available.

There was ample parking and several areas of the location were lit in order to clamp down on the theft of vehicles, a problem which has been plaguing events held at Hope Gardens in recent times.

Inside the party, there were more than enough attractions to keep patrons entertained, as several sponsors erected booths and offered free products varying from food items to make-up accessories. Even new model motor vehicles were on display courtesy of KIA Motors.

Several female patrons were spotted in a long line at the Isabelle Day Spa booth, awaiting the make-up artistes who were shaping eyebrows and applying make-up products to patrons.

ZJ Johnny Cool described Absinthe during his set as being the official event signalling the start of the summer festivities. And indeed, the night represented the summer experience, because, despite being surrounded by trees, the heat was present and had patrons making several trips to the bar for water or ice to go with their Red Stripe beers.

ZJ Johnny Cool's selection of hip hop singles like Hate Me Now (Nas), Can I Get A (Jay Z and Jah Rule) and California Love (Tupac) and DJ Sanjay's new hip music from artistes like Lil Wayne and Young Money, had patrons dancing up a storm.

Coppershot Sound came next and they opted for reggae songs such as Mi Alright by Chronixx and Kabaka Pyramid, Princess Gone by Jah Mason, No No No by Dawn Penn, among others. The Coppershot DJs indeed proved that groovy reggae music can still get positive crowd reactions as much as dancehall and hip hop.