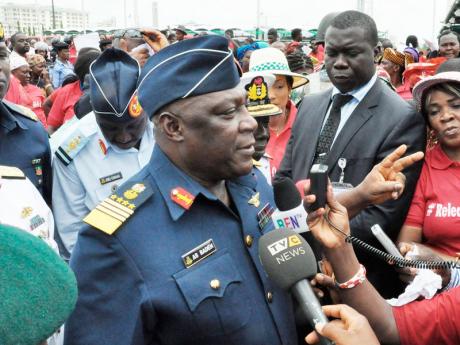 Nigeria's chief of defence staff Air Marshal Alex S. Badeh (centre) speaks during a demonstration calling on the government to rescue the kidnapped girls of the government secondary school in Abuja, Nigeria, in May. - FILE

More than 60 Nigerian girls and women abducted by Islamic extremists two weeks ago have managed to escape, officials disclosed yesterday.

Nigerian security forces and federal government officials had denied reports of the mass abduction from three villages in the northeast state of Borno on June 22.

Chibok local government chairman Pogu Bitrus said yesterday he had verified that about 60 women and girls escaped on Thursday and Friday by sending a representative who met with some of the escapees and their families at the hospital in Lassa, a town in the neighbouring Damboa local government area.

Vigilante leader Abbas Gava in Maiduguri, capital of Borno state, said Sunday that vigilantes in the area told him 63 women and girls escaped Friday while their captors were engaged in a major attack on a military barracks and police headquarters in Damboa town.

Small-scale kidnappings by Boko Haram extremists had been going on for months when they drew international condemnation for the abductions of more than 200 schoolgirls from a school in Chibok town of Borno state on April 15. Some 219 of those girls still are missing.

The government and military failure to rescue them has attracted criticism at home and abroad.

Boko Haram is demanding the release of detained fighters in exchange for the girls. Nigeria's President Goodluck Jonathan reportedly has refused to consider a prisoner swap.

Amid the stalemate, Bitrus said that attacks have increased around Chibok and that Boko Haram has taken over some villages in the area and is threatening to take over others. The Kibaku Area Development Association, a local residents' association of which he is also chairman, reported that 19 villages have been attacked since the April 15 abductions, with more than 229 people killed and about 100 seriously wounded.

In 90 per cent of cases there had been advance warning of the attacks, as happened in the Chibok kidnappings, yet the military had taken no action, the association said in a statement last Friday.