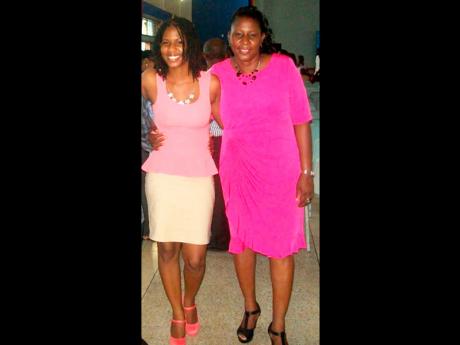 For many persons, the dreams they harboured when they were growing up never materialise. But not so for Shanea Gibson, who at six years old had made up her mind to become a doctor.

When The Gleaner first met Gibson in 2006, she was one of the island's top performers in that year's sitting of the Caribbean Secondary Education Certificate (CSEC), with seven grade ones and one grade two.

The Ardenne High School past student said she owed her success largely to her mother, Yvette Fleem.

"I know she really works hard to put me through school and everything, and I thought that I would make her proud," Gibson said back then.

When The Gleaner caught up with Gibson recently, following her taking of the Hippocratic Oath to officially become a medical doctor, she said she stuck to her dream because she knew she had to make her mother proud.

"My mom and I are very close; without a doubt I get some of my strength from her. I have seen the sacrifices she has made and could not let her down," the 24-year-old said.

Gibson said she always knew what she wanted and knew she had to work hard for it.

It is this determination her mother said she admires most in her daughter, the fact that she never gave up.

"There is nothing compared to seeing her take that oath. I cried the entire day, because I was so overwhelmed. When I look back and see all that we have been through, it wasn't easy, but she never gave up, she was always so focused in this time and age with so much distractions," Fleem beamed.

She said as a single mother of two, the struggles of putting her daughter through medical school could have easily broken her family, but instead it drew her closer to her children.

Gibson knew all too well about those struggles and said she used them to propel her towards achieving her goals.

"I didn't have a scholarship, and every year it would reach that time when you start thinking, where is the money going to come from? I had my moments where I cried, but I knew I could make it and I had to believe that," Gibson said.

Her mother, too, had to convince herself that she could do it during the times when the financial stress of putting her first child through medical school became a major burden.

"We are not wealthy people. I am civil servant and you work and you try to save for your children's education, but it gets really difficult at times, but she would never give up and her determination is what kept me going," Fleem added.

For Gibson, her journey has just begun, as she now has her eyes set on becoming a top obstetrician and gynaecologist.

"It might sound cliché, but there is no other way but to work hard, stay focused and never give up on your dreams. That's the only way to achieve success," Gibson offered as advice for other young people.