'Cliff Hughes On-line' off to a grand start 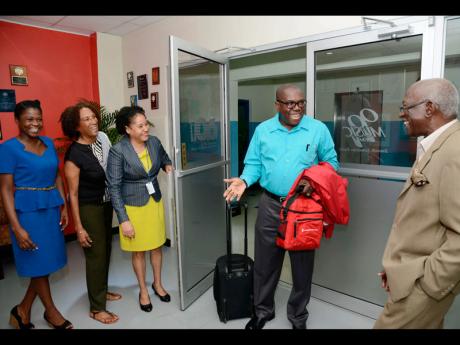 'Cliff Hughes On-line' takes over the helm of the coveted spot from Senator Marlene Malahoo-Forte, and the late legend Wilmot 'Motty' Perkins before her, spanning 10 a.m. to 2 p.m., Monday to Thursday, advertising itself as being about the views of the listeners.

Hughes began his segment with the Prayer of St Francis, pleading: "Lord make me an instrument of Your peace," later adding, "where there is error, truth."

Later in the opening segment of 'Cliff Hughes On-line', he explained: "I am not objective, I have views, strong views," and "it's your show, it's a call-in programme, it's about your views."

His first caller praised both the host and "the number one station in Jamaica", Power 106FM. Many calls followed, welcoming him to the 106 frequency and going on to discuss a wide range of issues, from outgoing Commissioner of Police Owen Ellington and IMF chief Christine Lagarde, to Power 106FM reinstating a toll-free line on which callers can contact Hughes' show.

"Based on the feedback, I think it went well," he told The Gleaner, moments after coming off air after his first day on the job.

"The callers were very involved; from my colleagues, the responses were encouraging. I personally felt a little nervous at the beginning but you know you get used to this and it settled down and I enjoyed it and I'm looking forward to doing it."

When challenged about why he was nervous given his long and illustrious career in radio journalism, Hughes chuckled, explaining that it was a new assignment whose magnitude had put him in the spotlight.

Hughes is also the CEO of Nationwide News Network, presenting the station's flagship daily show 'Nationwide @ 5'. He told The Gleaner he was passionate about fixing education and improving the rule of law, order and justice in Jamaica and that his show would reflect that.

"I want a citizen, a voter who is going to be more informed and who will care more to ask more questions, better questions and demand greater accountability from those who have the privilege of leading this country."