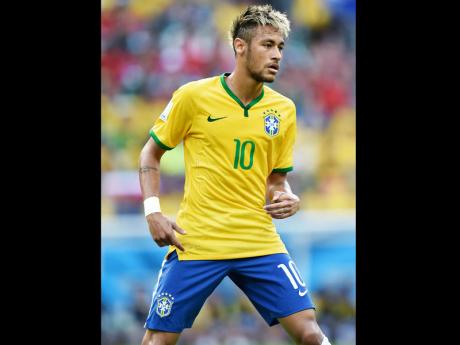 Neymar helped Brazil get this far at the World Cup. Now it's up to the rest of the team to win for its injured star, coach Luiz Felipe Scolari said yesterday.

Neymar will miss today's semi-final against Germany because of a fractured bone in his back, an injury that ruled him out of the World Cup and dealt a huge blow to the nation's hopes for a title at home.

"Now we have to do our part," Scolari said yesterday. "We will be playing not only for ourselves, for our country, for our dreams, but each one of us will be playing a little for Neymar because of everything that he has done for us."

Scolari said the team is over the shock of losing the player, and has changed the focus to trying to get ready for the match against Germany. He said Neymar, who scored four goals in the group stage, had already done enough for the national team.

done with being sad

"When Neymar had to go, he left a lot of him with us, and he took a lot of us with him," Scolari said. "We are already done with this process of being sad. When Neymar himself began talking to the other players after what happened, they understood that he has done his part already."

Scolari called Neymar "one of our references" and "one of the best in the world," but he reminded that Brazil has "22 other players who know they are special."

"We will miss Neymar's competiveness, his happiness," Scolari said. "But we have a group of quality players, and they can overcome the challenges and help the team advance."

Germany coach Joachim Loew said he expects Brazil to be extra motivated because of Neymar's absence.

Brazil captain Thiago Silva, who is suspended for the game, said the group will be playing with Neymar on their minds.

"Now it's time for the other 22 players to take on the responsibility of playing well and getting the win, especially for him, who wanted to be here now, but unfortunately was taken out of a World Cup because of what I think was a cowardly challenge."

Silva said the foul that took Neymar out of the World Cup, a knee in the back by Colombia's Juan Camilo Zuniga late in the quarter-final match against Colombia, was "not a normal move".

"Being a defender, I know how to defend, and that type of defending doesn't exist. It's impossible to get your knee through someone to get to the ball on the other side. Unless you want to hit the other player. That's not a normal match situation."

FIFA earlier yesterday said it will not take action against Zuniga.