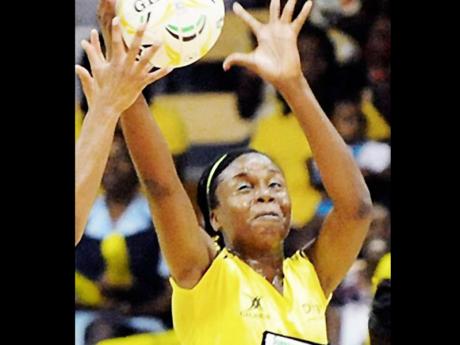 Newly appointed captain of the Jamaica's Sunshine Girls team, Nicole Aiken-Pinnock, said it is going to take a collective effort from everyone if they are to win a medal at this month's Commonwealth Games,which will be held in Glasgow, Scotland.

The Sunshine Girls, who are ranked fourth in the world, finished in the very same position at the last tournament held in Delhi, India, in 2010.

The 28-year-old Aiken-Pinnock, older sister of top shooter Romelda, told The Gleaner yesterday, that they have worked very hard in training, and the team's target is to win a medal at the tournament.

"We just have one aim right now, and that is to be on the podium at the Commonwealth Games," said Aiken-Pinnock.

"We have to work together to win each game. The girls are committed to the task at hand, we are working towards that," Aiken-Pinnock said.

Aiken-Pinnock, who made her debut for the Sunshine Girls at the 2006 Commonwealth Games in Melbourne, Australia, was named captain of the team on Sunday.

"It is an honour and privilege to lead my country at the Commonwealth Games, and I am going to do it with the best of my ability," she said.

She added: "I am just going to be who I am. The support is there from all the players and staff, and so there won't be any pressure, because I am there to be the leader of the team."