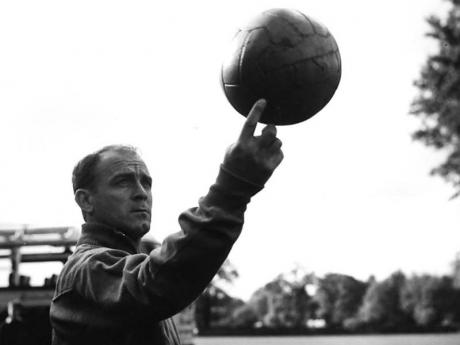 Alfredo Di Stefano, the player Real Madrid has hailed as the most important component in their mid-20th century ascent to becoming a global football powerhouse, has died. He was 88.

Di Stefano turned 88 on Friday. The following day, he had a heart attack on a street near Madrid's Santiago Bernabeu Stadium. Paramedics were able to resuscitate him after 18 minutes, but he spent the following days in a coma.

Renowned for his speed, versatility and strategic grasp of the game, he helped Madrid attain five straight European Champions Cups and was voted European player of the year in 1957 and '59.

In a career spanning five clubs in three countries - Argentina, Colombia and Spain - from 1945-1966, Di Stefano scored 789 goals in 1,090 matches. In the process he claimed top-scorer status once in the Argentine league, twice in Colombia's league and five times in Spain.

The 33-year-old left back was a free agent after his Chelsea contract expired, having been restricted to 17 Premier League appearances last season.

Roma said yesterday on its website that Cole's two-year contract has the option to extend it for a further season.

Cole, who earned 107 caps for England, retired from international football in May after being passed over for the World Cup in Brazil.

Cole won the Premier League, Champions League, Europa League and four FA Cups at Chelsea, which he joined contentiously from Arsenal in 2006.

English winger Tom Ince has ended his public search for a new team by staying in the Premier League and joining Hull.

Hull says Ince, who was out of contract at Blackpool, also "attracted interest from a number of Premier League clubs, this summer."

But Ince signed a two-year deal with Hull after talks yesterday at the northeast club. He spent the second half of last season on loan at Crystal Palace in the Premier League.