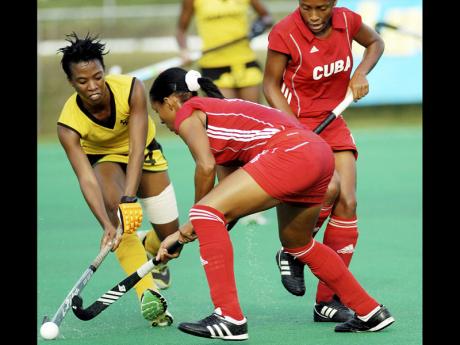 Action from a Pan American Games Hockey qualifier between Jamaica and Cuba at the Mona Hockey field in 2010. - file

A new playing surface is expected to be laid at the Mona Hockey Field by September. The new surface departed Argentina in late June and is expected to arrive in Jamaica by July 25, said managing director of the Sports Development Foundation (SDF) Denzil Wilks.

The old surface, which has been there for more than a decade, is being replaced at a cost in excess of $25 million, with the SDF picking up a sizeable chunk of that bill. Wilks estimated that the SDF would spend between $12 and $15 million on the project, with the remainder of the funding coming from Olympic Solidarity and money raised from corporate sponsors by the Jamaica Hockey Federation (JHF).

Wilks indicated that Jamaica had received a great deal of support from the government of Argentina in putting down the new surface.

"Experts will arrive a few days before to do the ripping up of what is there now and ensure that the base is secure and put down the new surface," he said. "We are scheduled to be completed by August-September. The Argentinean government has been very helpful and a company from Argentina has been willing to help with the installation at a discounted rate."

Also en route to Jamaica is the material that will form the new seats that will complement the new playing surfaces at the Leila Robinson Courts. The courts were resurfaced in early June in a project that was estimated to cost about $40 million.

The seats are expected to arrive in a few weeks, Wilks said. "The seating is on the way. They were tendered and ordered, so we are just waiting on the raw material to come in from overseas. That is a three-to-four-weeks wait. When that comes, there is a maximum of a month for implementation - taking down what is there and installing," he said as he explained that the wooden seats would be replaced by sturdy, lightweight aluminium seats that would be a lot more durable than the ones they would replace.

Wilks explained that there would not be a significant increase in the numbers of seats. The maximum possible, he said, would be about 900 seats up from about "just over 800", but the seats would be of the best quality possible. "We are going to take it to the best level we can take it right now," he said.