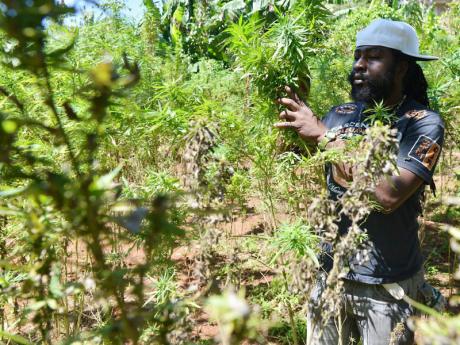 In this August 29, 2013 photo, a farmer, nicknamed Breezy, shows his illegal patch of budding marijuana plants during a tour of his land in Jamaica's central mountain town of Nine Mile. Breezy says American, German and, increasingly, Russian tourists have toured his small farm and sampled his crop. - AP

"It's great that governments in the Caribbean are finally pushing forward with this dialogue," said Ethan Nadelmann, executive director of the Drug Policy Alliance (DPA), which claims that it is America's leading organisation that promotes drug policies that are "grounded in science, compassion, health and human rights".

"With so much momentum for reform in both North and South America, it is crucially important that the Caribbean not be left on the sidelines," Nadelmann told the Caribbean Media Corporation (CMC).

He said the DPA is actively involved in the legislative process and seeks to roll back the excesses of the drug war, block new, harmful initiatives, and promote sensible drug policy reforms.

"We at the Institute of the Black World also pledge our support to this CARICOM initiative, recognising that it is a logical and enlightened move towards decriminalising the possession and use of small amounts of marijuana, and an important step towards researching the economic potential of a regulated medical marijuana industry in the Caribbean," said Don Rojas.

Rojas, the Vincentian-born director of communications at the Institute of the Black World 21st Century (IBW), told CMC that the IBW, which works on drug policy and criminal justice reform, is a leading black research, policy and advocacy organisation in the United States (US).

"We are committed to enhancing the capacity of Black communities in the US and globally to achieve cultural, social, economic and political equality, and an enhanced quality of life for all marginalised people," Rojas said.