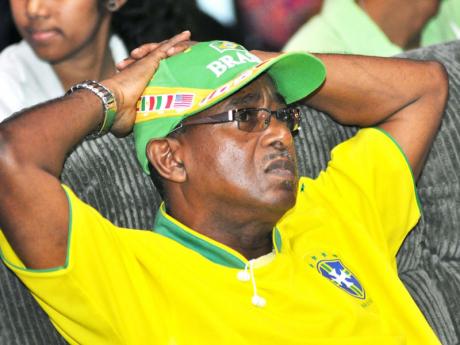 Don Streete looks on in disbelief at the Brazil vs Germany encounter at the SportsMax Zone yesterday. 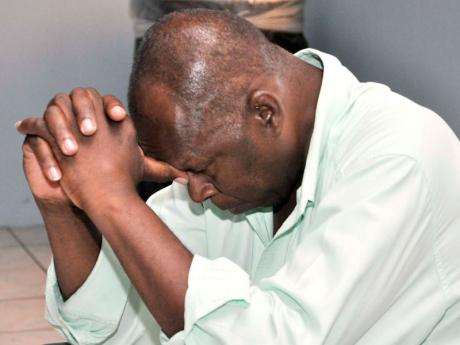 Paralysing disbelief preceded pandemonium as patrons packed inside the SportsMax Zone at the Chinese Benevolent Association in St Andrew witnessed World Cup semi-final history, with the biggest defeat inflicted on any team at this stage in the tournament since its inception.

Most humiliating was that it was the hosts, Brazil, the second-choice darlings of Jamaicans after the Reggae Boyz, who were on the receiving end of the drubbing, leaving scores of fans shell-shocked.

A carnival atmosphere accompanied deafening cheers among the Germany supporters as the South Americans were humiliated into submission by the 29th minute when the fifth German goal crossed the line.

"What is this?" shouted one Brazil fan contemptuously, spending the remaining 15 minutes of the first half trawling social-networking sites on her cell phone, seemingly searching for the answer to that very question.

Many Brazilian flags inside the venue now flew at half-mast while some disappeared from view entirely as the magnitude of the scoreline crushed all hopes of a comeback. German flags waved forcefully in the hot air of the building at 176 Old Hope Road as the hope and expectations of the Brazil fans were washed away by tears of despair.

"I feel very bad, very bad," said one man, who had taken a quick break from work to watch the first half.

Twenty-seven-year-old Marlon Graham told The Gleaner: "Brazil is dying. Germany is taking revenge from the 2002 finals and I guess the defence is real weak."

The second half welcomed a Brazilian side with renewed confidence, returning to the field of play energised, yet they could not deliver on the expectations placed on them. Two more goals soon followed, taking the European tally to seven; however, a goal by Oscar in the 90th minute of the game spoiled the prospect of a German clean sheet.

"Brazil has been scraping through all their matches, and so when they meet a team that has been on top of their game, it shows how weak they were to begin with," said Toni-Ann Doyley.

"To some extent, I feel it for them, but I blame them because the squad selection was poor," said 26-year-old Jermaine Young.

"As you can see today, it was Germany playing the South American-type technical football while Brazil was playing the long, English, boring, outdated game, and you saw the results."