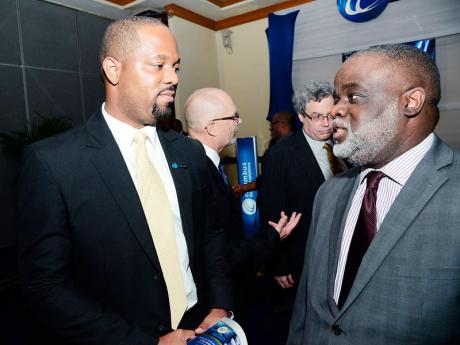 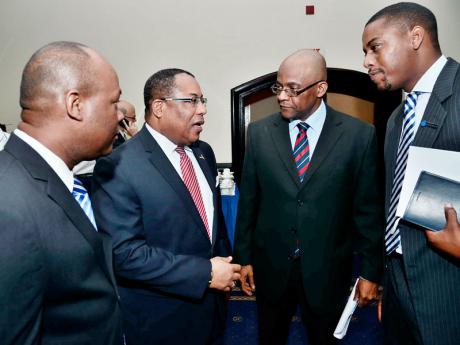 Minister of Industry, Investment & Commerce Anthony Hylton (second left) updates members of the Columbus team (from left) Sean Latty, Donovan White and Jenson Sylvester on the latest developments with the Jamaica Logistics Hub Initiative. The minister was speaking at Columbus Business Solutions workshop on Hosted PBX, just one of several solutions being provided to assist Jamaican businesses to capitalise of the logistics hub. - photos Contributed
1
2

On a scale of one to 10, Jamaica's preparation to become the fourth node in the global logistics chain has been rated at a mere two.

This is according to Dr Fritz Pinnock, executive director of the Caribbean Maritime Institute.

Pinnock said the major obstacle preventing Jamaica from getting to the stage it should be, at this moment, is the mindset of the people and the way the country is going about educating the population.

He said the country was yet to embrace a "holistic paradigm shift" that is required for Jamaica to become a respected and credible logistics hub.

"We have not embraced as yet that this is not just something that will happen with our current paradigm; we want to continue living our lives and expect that this thing will just come and we reap the benefits," he told The Gleaner.

He said everything, from the bureaucracy that currently exists to the leadership in schools must be seriously reconsidered if the country is to move forward.

compete with the best

"We have to do things differently, because we are going to be required to compete with the best of the best in the world. This is not about us enjoying our own little space and we just do what we want and everybody just accept it," Pinnock argued.

However, he was quick to point out that all this is part of a larger process and should not be viewed as "a simple switch that you flick on and say yes we are ready".

The chairman of the subcommittee on education and training on the Logistics Hub Taskforce, added that critical to this change would be a restructuring of the education system.

Pinnock said greater focus must now be placed on ensuring that Jamaican students are globally competitive with the right skills and training.

"We have to give more credence to skills based education, this is one of the most important things but we tend to not place much attention on it. We need to develop these areas so that we can meet and exceed accepted international standards," he added.

He said the country should begin focusing on getting more students qualified by meeting and exceeding established international standards.

Pinnock also explained that in his estimation foreign investment is another vital factor that will determine Jamaica's success at becoming a global logistics hub.

Reiterating his stance that we are definitely not where we should be, in comparison to other countries in the region, Pinnock said, "We have to realise that it is not so much what we do, but it is about the injection of foreign funds."

Referencing the planned development of the Goat Islands in St Catherine and Vernamfield in Clarendon, he stressed that the country cannot afford to continue debating over the Chinese's bid to invest in these projects.

"I am tired of saying that the single most important project is the Chinese investment in Goat Islands and the link to Vernamfield. That, to me, would be the transformative base for Jamaica," Pinnock stated.

He said that the current Kingston Container Terminal will play a role in the hub, but it does not have the ability to transform the economy, as its current size does not enable it to accommodate major anchor companies, which will be the foundation of the hub.