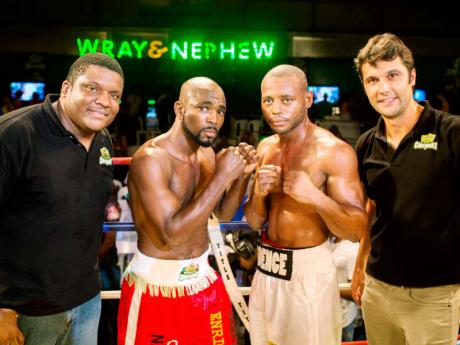 Sakima Mullings vows to knock out Tsetsi 'Lights Out' Davis when both fighters meet in the ring for the title of Jamaica's ultimate boxer and and the $2 million-win incentive in the Wray & Nephew White Overproof Rum Contender Boxing series final at the National Indoor Sports Centre (NISC). Fight time is 9:30 p.m.

Mullings is highly confident that the fight, scheduled for 10 rounds, will not go the distance.

"It will be a case of different patient, same treatment," Mullings told The Gleaner.

"The fight won't go beyond round six. I will knock him (Tsetsi Davis) out," he predicted.

"I'm pretty confident that I will knock out Davis because we have sparred and I know a lot about his strengths and weaknesses. Well. I'm very familiar with his style," Mullings said.

"I know when he is not comfortable, so I would go for the kill whenever the time is right," he noted.

Mullings also said that being Jamaica's ultimate boxer is very important for him.

"It is important to me as the Contender series is the biggest thing in Jamaica's boxing, and to be the people's champion means a lot," he declared.