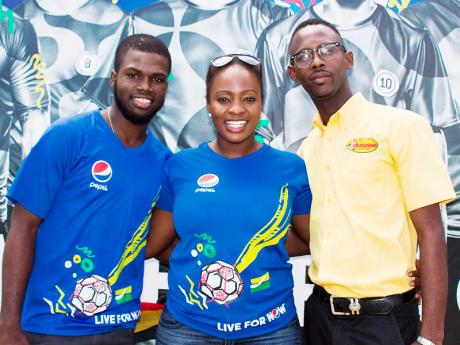 It will be a cash-filled summer for consumers, thanks to beverage giant Pepsi-Cola Jamaica. The company recently launched the latest promotion in its 2014 Pepsi football campaign in Kingston at Tastee Papine.

According to Carla Hollingsworth, brand manager, Pepsi, the brand is always looking for exciting ways to engage consumers and to give back to them for their continued support and loyalty.

"We are really looking forward to rewarding consumers this summer. Through a partnership with Tastee and mobile telecoms, we will be offering prizes that will entice persons and take that extra strain off their pockets," Hollingsworth said.

The UTC (Under the Cap) promotion, aptly called 'Cash Kick-Off', will run from July 4 through to August 15 and be open to every consumer who purchases a Pepsi 20oz or a Pepsi 2 litre with a yellow cap and promotional labels.

"All yellow caps are eligible for cash prizes, and some will have instant prizes," she added.

Instant prizes of Pepsi and patties are redeemable at 26 participating Tastee locations islandwide. Consumers enter for the cash prizes and call credit by visiting the Pepsi Facebook page, where they will enter the code under the cap of Pepsi purchase.

Another exciting element of the UTC promotion involves a 'Pepsi Football Machine Road Tour'. Pepsi will be taking its latest innovation, the interactive vending machine, on a road tour to various locations around the island, to give consumers a chance to show off their football skills and win free Pepsi.

Pepsi-Cola has already started branding numerous trade outlets, as well as participating Tastee outlets, in preparation for the campaign.

"Consumers will love this! It will be tremendously satisfying for them, and it is all about the consumers for Pepsi," Hollingsworth ended.