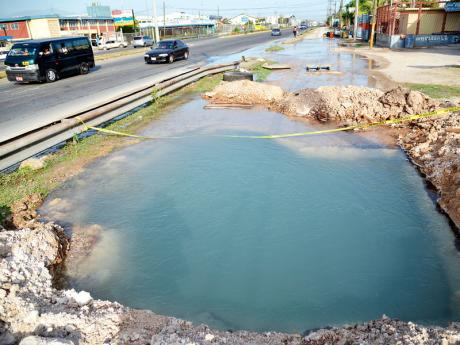 Several gallons of water rush from this broken water main along Spanish Town Road, across from Hardware and Lumber, even as the country grapples with a drought. The water has been running to waste since last Friday. A businessman told The Gleaner that workmen from the National Water Commission dug-up the area on Saturday but never returned. - Norman Grindley/Chief Photographer

With no substantial amount of rainfall projected for the rest of the year, Jamaica is headed for critical drought conditions.

According to projections from the Meteorological Service, from July to September, the parishes of Manchester, Clarendon, St Thomas, Portland and St Mary will be at greater risk for extreme drought.

And with the below-average rainfall expected to continue, Kingston, St Andrew, St Catherine and Clarendon are expected to be the worst-affected parishes for the July to December period.

"With respect to rainfall prediction and the availability of water, conditions are looking pretty dismal for the country. At this stage, conditions seem to be pointing that things will become worse before they get better," Jeffery Spooner, director of the Meteorological Service, told The Gleaner yesterday.

Jamaica is among several Caribbean countries experiencing critical drought conditions because of climate change as well as the El Niño climate phenomenon that occurs when a vast pool of water in the eastern tropical Pacific Ocean becomes abnormally warm. These conditions prevent the development of any storm or hurricane.

These conditions lead to the Caribbean being warmer and drier, experiencing below-normal rainfall.

"With the entrenchment of the El Niño phenomenon, the projection is for below-normal rainfall activities for this year, especially during the months of October and November, when we normally expect to get an appreciable amount of rainfall," Spooner stated.

Noting that a drought condition is when there is below 60 per cent of normal rainfall over a consecutive eight-week period, he said so far, January and May were the only two months that the country had above-normal rainfall.

"Although we are in the dry period now, what has been happening is that even from a few months ago we have not been getting any significant amount of rainfall, so the projection is that some parishes are expected to fall into drought conditions soon and this will continue until we get an appreciable amount of rainfall, which is not expected anytime soon because of the El Niño system," the director emphasised.

Spooner urged, "We definitely have to do all we can to conserve what little water we have now in order for us to properly manage the resources that we have available in a sustainable way. However, for a longer-term solution, rainwater harvesting should be a part of our way forward."

Last week, Minister of Water, Land, Environment and Climate Change Robert Pickersgill announced a number of emergency water-management measures that are now in effect until Jamaica's water reserve is back to normal levels.

Under the restrictions, persons are not allowed to water gardens, lawns, grounds and farms; or wash cars using a hose, wash roadways, pavements, paths, garages or out-rooms. Persons are also barred from filling tanks, ponds or swimming pools. Tanks can only be filled if the water is for domestic purposes such as cooking, washing, bathing and sanitation.

Persons found in breach of the regulations, if convicted, will be fined $1,000 or imprisonment not exceeding 30 days.

The country is urged to continue to practise vigilant water management and conservation, as it weathers this drought crisis. Under the ministry and the National Water Commission, a public education programme is under way to outline tips and plans.

In the meantime, the National Drought Management Committee is executing a number of actions, including programmes to upgrade and rehabilitate existing storage tanks across the island. Water is also being trucked to the worst affected sections of the island.

During 2009-2010, Jamaica was affected by severe drought conditions because of the El Niño phenomenon.