Symbol of pride or disrespect? 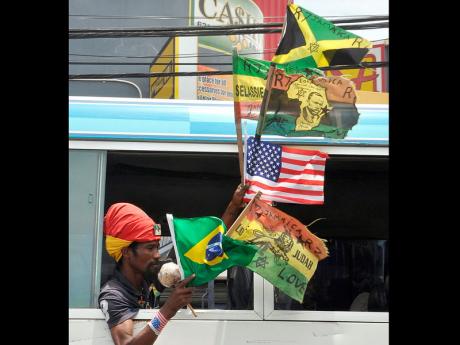 This man was recently seen hanging from a bus window travelling along Half-Way Tree Road with flags that are supposed to represent countries taking part in the 2014 World Cup. - Jermaine Barnaby/Photographer

As the final match for the 2014 FIFA World Cup draws near, Jamaicans are supporting their favourite teams with the regular loud-mouthed banter and by flying the teams' national flags in their cars, in their offices at work, and even in their homes.

The sale of flags of the countries taking part in the World Cup was brisk even before kick-off on June 12. However, not everyone supports the casual display of these flags. Some Jamaicans believe that spirited football fans are violating certain protocol flying them.

But while there are guidelines outlining the protocol for the use of the national flag of Jamaica, they do not speak to what is regarded as the casual use of other flags. According to these guidelines, the national flag of Jamaica takes precedence over all other flags on Jamaican soil and should be treated with respect and dignity. The national flag, or any other national symbol, should never be smaller than another flag flown at the same location and no flag should be flown to the left of the Jamaican flag. Flags from any sovereign nation should not be flown any lower than the other; this act suggests the inferiority or superiority of the flags and the countries they represent.

Merrick Needham, a protocol and logistics consultant, states that the issue lies not in the celebration of the football teams' victories, but in the disrespect for Jamaica's other national symbols, such as the Coat of Arms. Young men and women are often seen with the Coat of Arms sewn on their clothing or other apparel.

Needham argued that other countries would not accept the kind of disrespect shown to their national symbols as Jamaicans show for theirs. In other sovereign nations, such as the United States or the United Kingdom, the improper use of national symbols is a punishable crime.

When asked about the strict enforcement of flag protocol, Needham suggested that it would deter people from misusing Jamaica's illustrious flag and appreciate its honour and symbolism.

When Jamaica achieved Independence from Britain in 1962, the national flag signalled the birth of our nation. It serves as a memory of Jamaica's past achievements and gives inspiration for its future.