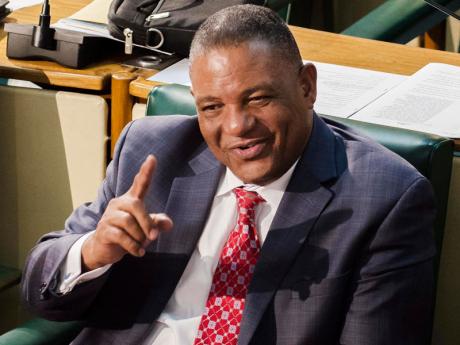 Minister with responsibility for the public service in the Ministry of Finance and Planning, Horace Dalley, gesticulates while making his presentation in the Sectoral Debate in the House of Representatives on Tuesday. - JIS Photo

THE GOVERNMENT has said it is willing to consider any proposal for the divestment of Caymanas Track Limited (CTL) which would involve relocating the racetrack from its current location.

Horace Dalley, minister without portfolio in the finance ministry - who has responsibility for the gaming industry - said in Parliament on Tuesday that "the Government is not opposed to the relocation of the track within a vicinity in Portmore".

"We are not opposed to building a brand-new track while this track is operating, creating jobs while operation is going on ... a very beautiful place, and then close that one and send the other one to it," Dalley said, noting that he was sending a signal to potential investors.

Caymanas Park rests on a property of 196 acres of land in Gregory Park, Portmore, St Catherine. The land and buildings are owned by CTL, a government entity.

Dalley said the track is in need of significant capital injection to continue its modernisation, which the Government is unable to undertake, and announced that the divestment plan for CTL is proceeding apace.

He told Parliament that there have been two expressions of interest to date - one from the Racing Divestment Committee (a local stakeholder group) and the other from Britnelle Development Group LLC (Maryland, USA) for the acquisition of CTL.

The minister insisted that CTL "possesses tremendous potential to become a viable and profitable entertainment entity, provided the right vision and investments are in place".

In the meantime, Dalley said the Government will be moving to improve the breeding stock of horses in the country.

The breeding stock that is presently in Jamaica has deteriorated and we are examining the possibility of injecting new stock and to work with the breeders to inject new stock. It is the only way that racing will flourish," Dalley said.

Importers of racehorses, which are not for breeding, saw an increase in custom duties on New Year's day as the Government rolled out an omnibus tax incentives regime, which is a requirement of the four-year Extended Fund Facility with the International Monetary Fund.

The omnibus regime will eliminate ministerial discretionary powers to grant or validate any tax relief and put in place a transparent regime for limited tax incentives.

Prior to January 1, importers of racehorses, which are not for breeding, paid 30 per cent custom duties. However, the duties will be increased to 40 per cent under the new regime.

At the time of the announcement, racehorse owner Michael Bernard told The Gleaner that the increase in the duties will mean added cost to importers.

The racehorse owner told The Gleaner that it can cost between US$15,000 and US$25,000 for a good horse - a cost which is further inflated by import duties and taxes.

Bernard said the cost associated with the importation of horses, which are not for breeding, serves only to discourage people from getting bloodstock from overseas.

"The big races in Jamaica, the Derby, the St Leger, all the Guinness, the Superstakes, all of those races exclude imported horses," Bernard said.