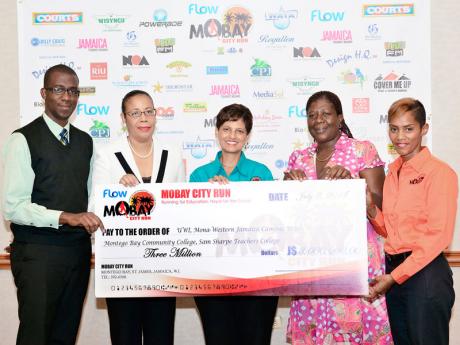 Following
on the success of the first staging of the Flow MoBay City Run 10K, 5K
and Walk race on May 18, the organisers handed over a cheque valued at
three million dollars to the four western-based tertiary institutions
for assistance to needy students.

The handing over was held at the
Holiday Inn Sunspree Resort in Rose Hall, with chief organiser Janet
Silvera lavishing praise on her team for handling the inaugural run with
"dedication and commitment" to the cause of providing necessary help
for students attending tertiary-level institutions who face difficulty
in sustaining their education due to lack of funds.

"I am honoured and proud of what we were able to
achieve through the Flow MoBay City Run. It was well received by all,
including the business sector, and we are happy to be handing over this
cheque as our commitment to education in western Jamaica," Silvera said.

The
Run brought out more than 2,000 participants, a number that exceeded
the expectations of the organisers, who have already begun planning for
next year's event, which they anticipate will be much bigger in terms of
sponsorship and overall participation.

The committee had set out to raise $5 million at the inaugural Run and will aim even higher next year.

"We
made three million this year; we plan to raise six million dollars next
year," said Silvera. "This may seem like a huge amount, but with the
City Run promising so much, there is no way we cannot also raise our
expectations."

In addition, the Wisynco Group, through its Bigga
brand will offer a special scholarship valued at $200,000 for two years
and this, according to group executive Vivian Newman, is an investment
in Jamaica's young people.

"Bigga has offered a scholarship of
$250,000 per year to a student studying marketing. Through this
initiative, a brand ambassador will be formed and this person will help
us to highlight the importance of staying in school and pursuing your
career goals," Newman said.