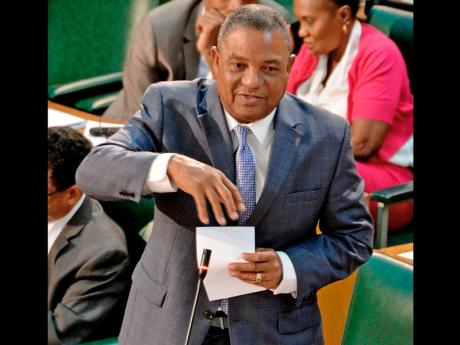 THE GOVERNMENT has signalled its intention to radically reform the system of paying overtime and other allowances to public-sector workers with Horace Dalley, minister without portfolio in the finance ministry, saying the 2015-2017 round of negotiations must address those issues.

Dalley, who was making his contribution to the Sectoral Debate in the House of Representatives on Tuesday, described the matters to be addressed as sensitive.

The issue of the payment of overtime to health professionals has been the source of much discontent as some regional health authorities have moved to cut allowances paid to practitioners as a means of controlling costs.

Dalley on Tuesday signalled that the Government will not be arbitrary in its approach, saying, "We will never, as an administration, issue any decree.

He told the House of Representatives that the ministers of Health, Education and National Security have commenced discussions with the unions about "changing the format of how we operate".

"The Staff Orders for the public sector is the widest applicable set of rules used in human resource management for the public sector. The last revision was done in 2004, and in recognition of the need to make this set of rules more current to today's environment, the Orders is being reviewed. A draft set of new regulations is now with our stakeholders for their further review, and it is intended that a new Staff Orders will be implemented this financial year," Dalley said.

In the meantime, Dalley said the Government is committed to ensuring transformation in the public sector, but argued that while the progress might seem a bit slow, the public sector is extremely complex.

"The work to achieve public-sector modernisation and an improved quality of service to the Jamaican people must proceed, fully cognisant of this complexity and the overall construct of the sector," Dalley said.

Debt and public-sector wages are to account for nearly 70 per cent of the country's $539.3-billion Budget. Some $233 billion, or 43 cents out of every dollar, in the 2014-2015 Estimates of Expenditure is to go towards servicing the debt, while $160 billion has been earmarked for the payment of wages.