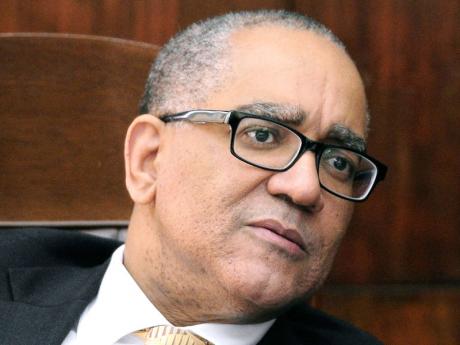 Bank of Jamaica Governor Bryan Wynter said Thursday that the central bank's intervention in the market during the day was a calculated move to prevent disorderly conditions in the market.

Wynter said the rapid rate of depreciation within the last few weeks was not justified by any fundamentals in the market.

"The bank intervenes to do two things: to prevent disorderly conditions from emerging in the market; and where there are lumpy flows in need of intermediation. We intervene on these two bases in support of a flexible, market-determined exchange rate," said Wynter.

"In the last few days, conditions have not become disorderly, but if these become unchecked," he said, the potential existed for "disorderly conditions to arise."

The BOJ regulates the foreign exchange market, but also intervenes from time to time. Its primary dealers sometimes disclose when the central bank is intervening, but the BOJ itself does not.

Its disclosure on Thursday was a break from that tradition.

Typically, such interventions involve the bank supplying its dealers with foreign exchange at a set price on the condition that they resell it at a stipulated price.

"The central bank usually intervenes in the FX market if they are unhappy with the pace of depreciation of the JMD. They did so on five occasions in the last two months or so, including today," said Gregory Samuels, head of treasury and trading at Scotia Investments Jamaica Limited.

"Given the success of the recent Government US$800-million bond issue and the high praise and vote confidence from the IMF, the central bank may feel that the JMD is depreciating too fast and an intervention is needed to slow the pace," he said.

Another treasury manager, who requested anonymity, also said the BOJ's participation in the market on Thursday could have been predicted.

"If you reviewed carefully the statement made by the IMF, then those of the BOJ and the Government, it seems to me everybody feels the dollar is at a comfortable level," he said.

"Also, given that they have now financed the dollar for the full year with the recent bond issue, the move was not unexpected," he said.

Governor Wynter, noting a fall of 30-33 cents over the last few weeks, said the movement was "much too fast" and not supported by the current-account deficit which is now closing quite sharply.

"The current account has improved very strongly. There is no underlying driver," he said.

The bank, as is usual when it plans an intervention, sent out bids to dealers the day before to invite their participation, he added.

It has been reported that the BOJ is projecting a yearend rate of $120:1, but Governor Wynter denied that anyone at the policy level had identified the rate as the point of competitiveness for the Jamaican dollar.

What was important in determining competitiveness, he said, was not a set figure, but the rate of inflation in Jamaica relative to its trading partners.

He agreed with the IMF that the Jamaican dollar was "slightly overvalued", but quickly added that given the gains in price competitiveness achieved to date, there is no current basis this year for the kind of adjustment in dollar value which obtained in 2013.

The dollar lost 14 per cent of its value in the calendar year, and just under 11 per cent in the fiscal period between April 2013 and March 2014.

"We have gained much more competitiveness than the [IMF] programme had projected, based both on actual devaluation and inflation, which has been lower than the projected target. Overvaluation has been significantly reduced," Wynter said.