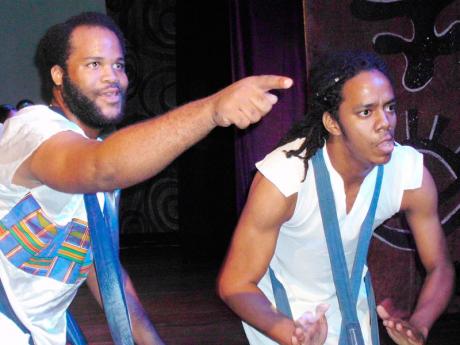 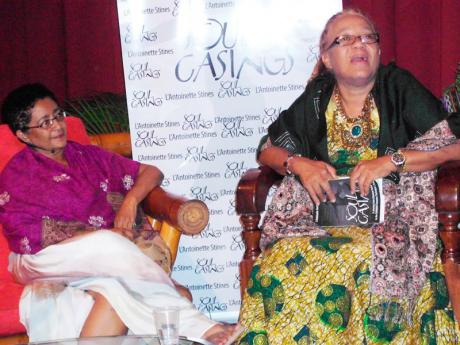 Innovation has been an enduring feature of L'Acadco: A United Caribbean Dance Force, so you never know what to expect at one of their shows. The company continued to push the envelope last weekend by having three different types of stage presentations at the Philip Sherlock Centre for the Creative Arts (PSCCA), University of the West Indies, Mona.

On Friday, there was the first ever full-length drum show in a Jamaican theatre. And on Saturday a full house was treated to both a dance concert and book launch.

Friday's show, L'Acadco Drum Xplosion in Concert, was an aural as well as visual treat. In addition to the drumming by the 12-strong ensemble (which included two young women), there was quite a bit of dancing by the drummers themselves, clad in colourful costumes.

Stines told me afterwards that she insists the drummers take dance classes. She also said that the drummers, led by musical director Kemoy Outar and his assistant, Shane Blake, structured the concert themselves; her assistance was minimal.

The segments of the more than two hour-long show were linked by storyteller Amina Blackwood Meeks, who entertained in her usual witty, conversational manner. She also provided quite a bit of information about the many different styles of drumming and types of drums played.

The drumming styles were related to the Afro-Jamaican religions and rituals from which they were sourced. Among them were Kumina, Revival, Nyabinghi, Dinki Mini and Ettu.

A lot of information on those religious practises was available in the printed programme. We were reminded, for example, that Kumina emerged in the 1840s "as a revolt against cultural annihilation." Revival emerged during the 18th to 19th centuries and blossomed in the Great (religious) Revival of 1861. Nyabinghi was created by Count Ossie in East Kingston and Dinki Mini is a celebratory dance, though it is associated with death.

In Ettu dances, there are unique steps for family members.

Wanting to let the drummers shine, Stines kept out of sight for most of Friday's show and only went on stage for the enthusiastically applauded curtain call. On Saturday, however, for the event titled Book Launch and Performance, she was much more visible.

The three-hour show began with Stines on a red sofa at stage right, explaining the origins of Soul Casings, essentially a rewrite of her PhD thesis on her original dance technique, L'Antech. The technique is now studied in educational institutions abroad and is on the Caribbean Advanced Proficiency Examinations syllabus, Stines told the audience.

Cleverly, themes in the book were linked to the dances performed. In the printed programme, the two came together under 10 headings, referred to as chapters. For example, Chapter 3 asks the question "Does an Anglophone Carimod [Caribbean and modern dance] technique exist?" This is answered by the dance L'Antech Meets Reggae, choreographed by Stines in 2011.

Chapter 4's theme, 'The technique or style discourse', was illustrated by the dance Neg Mawon (Running Slaves). Featuring only male dancers, the work shows slave characters at first as confused, frightened and desperate, but eventually triumphant.

Two of the dances, Kongo Kumina and Ruckumbine, were choreographed entirely or partly this year. The others were remounts, including the always popular Chat Bout Dem, which uses the spoken word and dance "to highlight great black inventors and love of self as a black person."

A more personal - but no less powerful - dance was Stines' 2013 work Quilted Memories. Choreographed to poems by Jean 'Binta' Breeze (mainly Ordinary Morning) and songs by Cherine Anderson (How We Livin), Adele (Someone Like You) and Queen Ifrica (Daddy), the dance shows six women explaining their difficult lives and eventually experiencing joyful transformation.

Stines reached back as far as 1979 for her now iconic early work, Satta, danced to Third World's Satta Massagana, to illustrate her concept of "synerbridge", a fusing of the synergy and bridging of styles which birthed L'Antech. The soloist, Kareen McLean, was excellent.

After the concert, Stines went on stage to give thanks to all who helped with the shows. She was accompanied by three important people in her life - her son Robert, first dance teacher, Alma Mock Yen, and mother, Eda Bucknor.

As is the case with all her shows, both Friday and Saturday nights' concerts ended with Stines leading the audience in prayer.