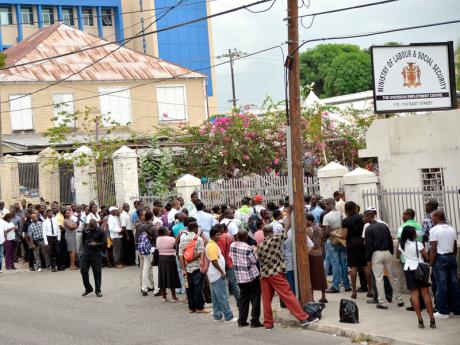 Job seekers line up at the Ministry of Labour and Social Security on East Street in Kingston in search of overseas employment yesterday.

Hundred of persons from St Catherine turned up at the Ministry of Labour's Overseas Employment Office in downtown Kingston yesterday morning to be interviewed for jobs in the United States of America and Canada. The interview process is slated to continue today.

"We started interviewing for the farm work programme from Monday," an official from the labour ministry told The Gleaner, explaining that this was this second day for job seekers from St Catherine, with the interviews scheduled on a parish basis, having started with Kingston.

She said that unlike previous years, when recruiting was done in two different batches for the United States and Canada, this year, there is only one pool of recruits, with the ministry also doubling up by recruiting in advance for the next year as there are only a few weeks left in the current season.

The official said the ministry had anticipated the large turnout of job seekers. Notwithstanding the lines at the gate, other recruits were being accommodated, seated under tents in the yard. All of the persons who turned up had already completed application forms and had been selected to be interviewed.

The overseas employment programme continues to be very popular in rural communities, especially where jobs are much harder to find than in urban centres and where poverty is worse.

It is estimated that 12,000 persons take advantage of the farm work programme each year, with another 8,000 people finding jobs in other areas of the guest work programme.

Unemployment in Jamaica, according to the last survey in April, was down from 16 per cent, in the latter part of 2013, to 13 per cent. However, some analysts argue that these figures mask the deeper problem of joblessness, especially among the youth, with 31.4 per cent of Jamaicans between the ages of 20-24 being unemployed and the number rising to 38.9 per cent for women in that age group.