Lift the bar! Permanent secretary urges Penwood graduates not to use poverty as excuse for failure 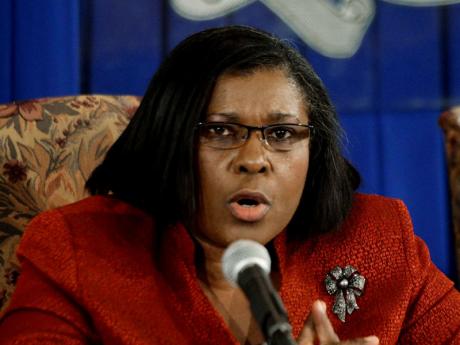 PENWOOD High School's grade-11 students were taught some hard-nosed lessons recently when they returned to school for the final time. But it was not the classroom setting that they had been accustomed to for the last five years. Neither were the lessons from their teachers.

Instead, the 100 graduands comprising mostly females, decked out in sunny blue and yellow robes, listened attentively as permanent secretary in the Ministry of Transport, Works & Housing, Audrey Sewell, impressed upon them the importance of lifting the bar as they embarked on the next phase of their lives.

"Don't limit yourselves as you go out," she challenged the students in her keynote address. Lift the bar - for your school, your community, your families and Jamaica."

Juxtaposing her own humble beginnings with the challenges the students faced, Sewell interspersed her message with stories of her childhood and her desire to become a teacher, even in the face of criticism that she "nah come out to nutten".

"Ignore the naysayers," she told them. "When people tell you 'it hard yuh si!' Don't listen to them!" she said. "You can do it!"

But she was not done. "Do not use poverty as an excuse for not lifting the bar," she charged. Sewell said that contrary to belief that she "nuh know the livity roun yah so," she understood their circumstances.

"Don't think I don't know the challenges you face as young people in this country. I know what you're going through," she told them.

Still, Sewell insisted that poverty was no excuse for them not to lift the bar. "Stop making excuses, lift the bar; do not be complacent, lift the bar; forget about the pity party. Don't tell yourselves that you can't do it, lift the bar," she repeated yet again as she encouraged them to be tolerant of others and to make positive news wherever they go.

In a wide-ranging speech, president of the Students' Council, valedictorian Errol Cole paid tribute to Nario Coleman who died following a stabbing incident at the school last year. He also remembered their now imprisoned school mate and Nario's attacker, who would also have graduated with the group.