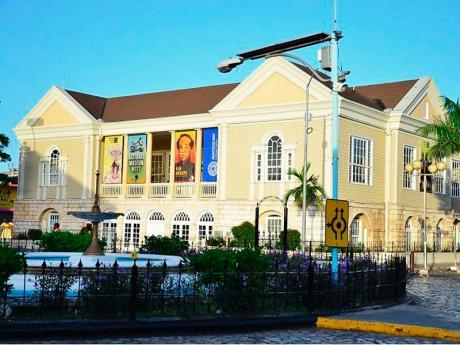 THE HISTORIC civic centre in Sam Sharpe Square has been renamed the Montego Bay Cultural Centre, and now houses the National Art Gallery West, a museum space for the performing arts and a bistro.

The facilities, which open today, boast two new art galleries and a museum displaying artefacts mounted by the Institute of Jamaica and the National Heritage Trust, according to a media release from the Ministry of Tourism and Entertainment.

The process of transformation, valued at $42 million, has been funded by the Tourism Enhancement Fund (TEF) in what that agency has described as a gift to the tourism capital.

TEF is an arm of the tourism ministry and, according to the minister, Dr Wykeham McNeill, the agency's funds are being expended on areas such as Montego Bay because "we need to ensure that our product is the best it can be". He is cognisant that "to be competitive, you have to be constantly upgrading the product".

"What makes us different is our culture and heritage," said the release, adding that with this in mind, projects being funded by the TEF have been approved and are being implemented.

Meanwhile, the TEF has partnered with the St James Parish Council in a $9-million rehabilitation of The Dome, preserving it as a landmark of Montego Bay's first domestic water supply source.

Close attention is also being given to the city's landscape and the TEF is also funding the beautification of the AGS Coombs Highway (Bogue Road) and Montego Bay's Elegant Corridor which spans the hotel development area.

According to the tourism ministry, hotelier Josef Forstmayr, who is chair of a Montego Bay Arts Council, is monitoring the $42 million conversion of the former civic centre.

Lauding the work of the TEF, Mayor of Montego Bay, Councillor Glendon Harris said he is pleased with the impact the Fund has been making on the city and looks forward to a continued partnership.

"Montego Bay being the tourism capital of the Caribbean, the TEF is truly enhancing the tourism product here in Montego Bay and St James on a whole. Some well-needed injection has been given by the TEF; they are truly partners in bringing Montego Bay to the level that it ought to be at," said Harris.

For the man whose vision it has always been to see the creation of a cultural centre, Member of Parliament for St James Central, Lloyd B. Smith, it is meaningful projects like these which will help to enhance the aesthetics of the Second City as well as to provide a certain level of civic pride.