Blake looking to explode in Glasgow 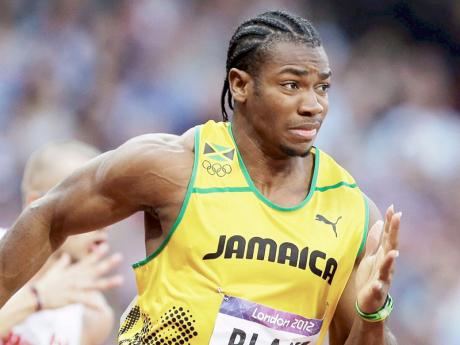 He hasn't quite looked like the 'Beast' of old, but Jamaican superstar Yohan Blake, will have another opportunity to show that last year's season-halting hamstring injury is truly behind him, when he lines up in the 100 metres at the Sainsbury Glasgow Grand Prix.

Set in Hampden Park, the host venue for athletics at the fast approaching Commonwealth Games, the meet replaces the London Grand Prix this year, giving many high-profile Commonwealth Games-bound Jamaicans a chance to test the surface ahead of the start of the July 23-August 3 multi-discipline event.

Blake is not one of the stars who will be donning the national colours in a couple weeks time, but with Shelly-Ann Fraser-Pryce, Warren Weir and Nickel Ashmeade among the big names listed to compete at the two-day meet, the Glasgow Grand Prix is also a reconnaissance of sorts.

The gold medal winner in the 100m at the 2011 World Championships and the second fastest man on the planet, has had a pedestrian start to the season so far. Perhaps that is to be expected at this stage from a man who spent much of 2013 in rehab, but try telling that to Blake, who is no doubt looking to improve on his 10.03, 10.02 and 10.21 efforts so far over 100m.

He will find a group of sprinters eager to take his spotlight, with Richard Thompson, who seems to have shaken off years of irrelevance with a 9.82 clocking to his name, Mike Rodgers and Jamaicans Ashmeade and Nesta Carter set to meet him at the start line.

Weir (19.82) the world leader in the 200m, is coming off two straight losses, after second place finishes at the National Senior Championships as well as the Edmonton International Classic. The Olympic and World Championships medallist is expected to bounce back and show his class with Panama's Alonso Edwards - who like Weir, has already gone sub-20 seconds this year with 19.84 to his credit and now veteran Wallace Spearmon expected to keep him honest.

The women's 400m has been one of the more exciting events on the track this season, with the returning Sanya Richards-Ross, who has gone 49.66 so far this year and her US compatriot Francena McCorory - 49.48, looking most impressive in recent weeks.

Add former World Champion Amantle Montsho, Natasha Hastings and the impressive Jamaican pair of Stephenie-Ann McPherson and Novlene Williams-Mills, who herself has only lost once in her last seven races to the mix and it seems like another sub-50 seconds clocking is on the cards in Scotland's largest city.

Roxroy Cato has looked solid so far this season, with a personal best 48.48 already registered beside his name and he will be hoping to continue his preparation ahead of the Commonwealth Games when he lines up alongside Olympic champion Felix Sanchez, Javier Culson and Michael Tinsley in the 400m hurdles event.