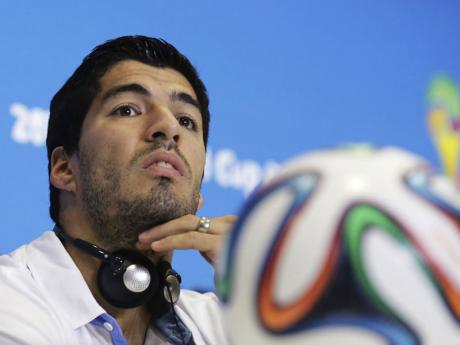 In this June 23, 2014 file photo, Uruguay's Luis Suarez listens to a question during a press conference at the Arena das Dunas in Natal, Brazil. - AP

FIFA has rejected Luis Suarez's appeal against his lengthy ban for biting an opponent in a World Cup match.

Football's international governing body yesterday said its appeals committee rejected the appeal by Suarez and the Uruguay football federation in its entirety. But that doesn't mean Suarez has given up hope of playing on the opening day of the season.

The Uruguay and Liverpool star has up to 10 days to get the written decision from FIFA, which he needs to lodge an appeal against the ban with the Court of Arbitration for Sport (CAS). If he does lodge the appeal, he could apply to CAS for an immediate freeze on the sanctions.

Suarez was banned for nine competitive international matches, four months from all football, and fined 100,000 Swiss francs (US$112,000) for biting the shoulder of Giorgio Chiellini during Uruguay's 1-0 win over Italy in a group-stage game in Brazil.

It is the third time Suarez has been banned for biting an opponent, after similar incidents at both Ajax in the Dutch league and Liverpool in the English Premier League.

The incident was missed by match officials, and FIFA's disciplinary committee studied video evidence before charging the Uruguay forward.

The ruling to uphold the sanctions was expected, as FIFA's appeals panel seldom changes disciplinary verdicts.

If Suarez seeks and is granted from CAS a freeze of his sanctions during his appeal process, he would be allowed to train and play with his club until a final verdict is reached.

Suarez is reportedly negotiating a move from Liverpool to Barcelona. FIFA said a transfer could proceed despite the sanction from football activity.