Weary Dutch have no interest in 3rd-place game 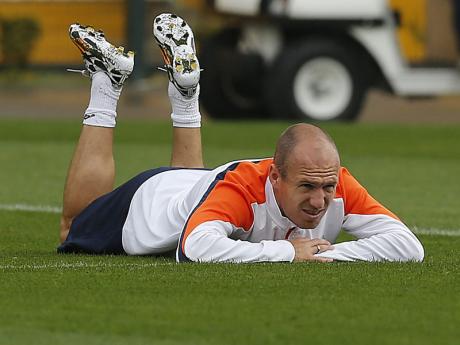 The Netherlands squad must stay at the World Cup when coach Louis van Gaal dearly wishes they could just go home. Next up? The game no one wants to play.

Faced with the prospect of the third-place game against host, Brazil, tomorrow after a disappointing semi-final loss to Argentina, Dutch coach Louis van Gaal has criticised the match as meaningless and "nothing whatsoever to do with sports".

"I think that this match should never be played," van Gaal said after his team went out 4-2 in a penalty shootout following a 0-0 deadlock through 120 minutes against the Argentines. "I've been saying this for 10 years. But anyway, we will just have to play that match."

The Dutch somehow have to lift themselves one last time at the World Cup. Tired and bitterly disappointed, it won't be easy.

"They can keep it," Netherlands forward Arjen Robben replied dismissively to a question on how he felt about playing for third. "Only one prize counts and that is becoming world champions."

Having lost the World Cup final four years ago, the Netherlands' attitude is understandable. And although van Gaal has been campaigning for a decade to get the game scrapped, the Dutch must honour the commitment.

But while The Netherlands' players aren't really interested, the Brazil squad sees the game as an immediate opportunity for redemption following a 7-1 humiliation by Germany in the semifinals. That has left one team much more determined to play this match than the other.

"Life goes on, we need to look forward to our next goal, and our next goal is to win the match for third place," Brazil coach Luiz Felipe Scolari said. "We have to play it. It has become our main goal."

Far from a main goal, it's an irritation for the Netherlands.

Van Gaal said there were a number of things he didn't like about the match, but the one that really grated with him is that a team faces the possibility of going home off back-to-back losses after doing so well and making the last four of a World Cup. The Brazilians have also had an extra day of rest after their semi-final on Tuesday.

"So that's not fair play either," van Gaal said. "But the worst thing is, I believe that chances are that you lose twice in a row. A tournament where you've played so marvelously well, that you go home as a loser just because you could possibly lose the last two matches. So, this has got nothing whatsoever to do with sports, not in my view."