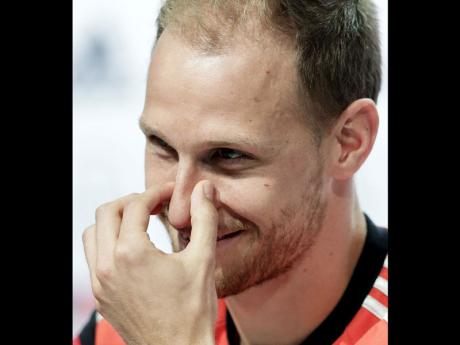 For a man about to face one of the game's most prolific scorers, Benedikt Höwedes is remarkably calm and composed ahead of the World Cup final.

Even more so considering that he'll be playing out of his usual position.

Höwedes has been used as left back by Germany coach Joachim Loew during the tournament and the Schalke defender is likely to be the one assigned to stopping Argentina star Lionel Messi's runs on the right wing.

"I'll do my part, but it will be a collective effort. That's how even a player of such quality can be stopped," Höwedes said yesterday.

Höwedes already has had to deal with another scoring sensation, Cristiano Ronaldo of Portugal. Ronaldo was held scoreless and Germany won their World Cup opener 4-0.

Usually a centre back, Höwedes has defied sceptics with his performances at the tournament.

"Since we are in the final, I must have done something right," said Höwedes, one of the three Germany players to have played every minute of the tournament. The other two are goalkeeper Manuel Neuer and captain Philipp Lahm.

The position of left back has been considered the weak link in Germany's team for years. Loew has tried several players in the position and even complained once that "I can't cut a left back out of wood" when none met his standards.

When exactly Loew came up with the idea of using Höwedes is not clear, but he has been at left back since day one of the tournament.

"I am playing in a position for which I haven't trained. But I think I am helping the team with my presence," Höwedes said.

Germany started the tournament with four centre backs in their last line of defence, but Lahm has since returned to right back from the midfield and the defence has gained stability.

Hoewedes has played right back for Germany and Schalke when necessary, but being on the left is a novelty.

"For me, it's completely crazy what's going on. I still can't believe it," he said. "It's huge what's happening to me, and the final will be the highlight. We want the title."