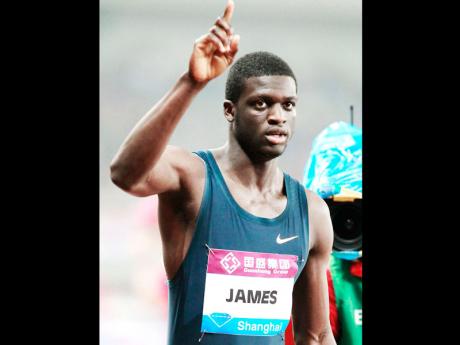 Olympic 400 metre champion Kirani James will lead a Grenada contingent to the 2014 Commonwealth Games in Glasgow, Scotland from July 23 to August 3.

James is included in a 16-member team which will participate in three sporting disciplines - athletics, boxing and swimming - announced by the Grenada Olympic Committee.

The Grenadian quarter-miler holds the Commonwealth Youth Games' record of 46.66 set in Pune, India in 2008.

Grenada's lone Commonwealth Games medal is silver, won by Alleyne Francique in the Men's 400 at the 2006 Games in Melbourne, Australia.

Four days after winning Wimbledon, Novak Djokovic has married his pregnant fiancée in a private ceremony in Montenegro.

Djokovic and long-time girlfriend Jelena Ristic were wed yesterday in an upscale resort on the Adriatic Coast.

Local media says the ceremony was attended by family, friends and guests, but away from the public eye.

Djokovic and Ristic first met in high school. They have been together for more than eight years and are expecting their first child later this year.

The Cavaliers and Boston Celtics confirmed the deal yesterday when the NBA moratorium on signings ended.

Cleveland sent guard Jarrett Jack and Russian swingman Sergey Karasev to Brooklyn and centre Tyler Zeller and a first-round draft pick to Boston. Cleveland acquired a future conditional second-round pick from the Celtics and the draft rights to forwards Ilkan Karaman of Turkey and Edin Bavcic of Bosnia and Herzegovina from the Nets. The Celtics will get guard Marcus Thornton - and his expiring $8 million contract - from the Nets.

The deal is designed to give the Cavs enough room under the salary cap to offer James, the four-time league MVP, a maximum contract ($20.7 million a year).