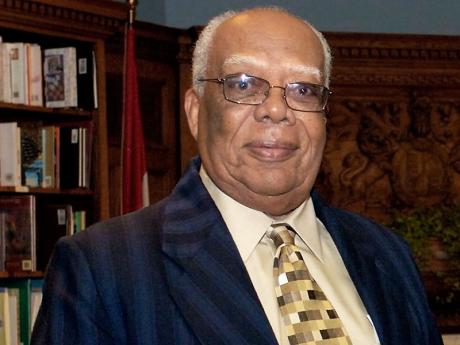 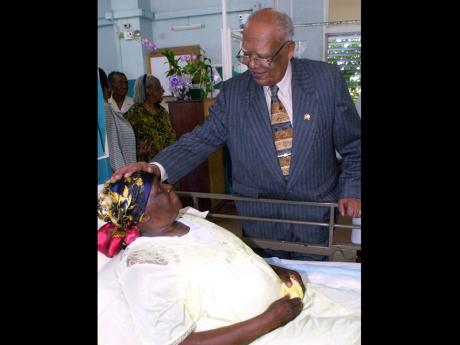 Elma Coley, a patient in ward eight at the University Hospital of the West Indies is given words of comfort by Sir Howard Cooke on his annual Christmas visit to the hospital on Thursday, December 16, 2004. 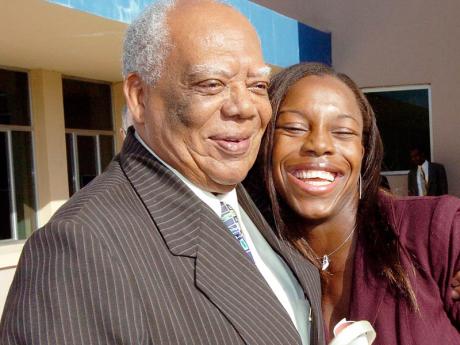 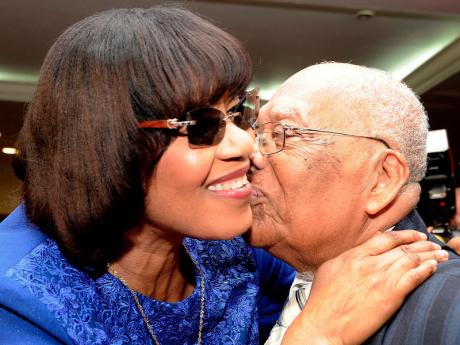 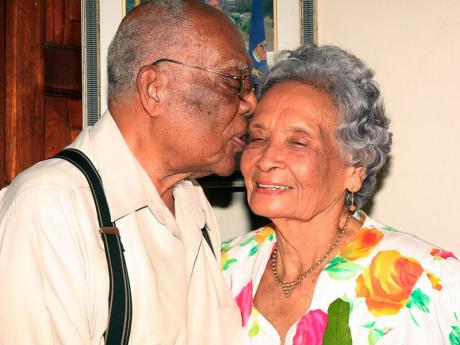 Former Governor General Sir Howard Felix Hanlan Cooke died yesterday afternoon at the age of 98. Born on November 13, 1915, in the community of Goodwill in St James, Cooke was installed as Governor General of Jamaica at King's House on Thursday, August 1, 1991.

However, his work in the public sector started long before, from the days when Norman Manley's groundbreaking Jamaica Welfare took shape in 1937.

At the age of 21, Cooke, fresh out of a triumphal studentship at The Mico Teacher Training College, could not resist the call for self-sacrificing recruits to go into the Jamaican hinterland to give children the gift of learning.

Cooke regarded Norman Washington Manley as a great mentor and considered it a privilege to share in Manley's vision of dedicated service in the bushes, to lift Jamaica out of the quagmire of colonial deprivation and into a future primarily of our own making.

He told Laura Tanna in a December 2001 Gleaner interview: "The greatest inspiration came to me when I was closely related to Norman Manley ... . His genius was in telling our people how to build communities. He made me feel that no nation can develop unless you develop the communities. He truly believed in an egalitarian approach to society... . He was aware that at the end of the day there would be differences in production and where people would reach, but he felt that you should give everybody a chance."

Cooke said, "I support the idea of getting children into school at the earliest time, and making sure that for a period, you provide serious education, teaching them not only how to read and write, but their responsibility in living."

Howard Cooke was very comfortable with the motto of Jamaica Welfare, "We are out to build a new Jamaica with Christ as our pioneer."

Declining offers to teach in the capital city, following a brief stint as teacher at his alma mater and at Mico Practising School, he participated, through Jamaica Welfare, in the establishment of community centres and community associations in Portland and St James.

He was very proud of the fact that the education policy-makers of the day, on their inspection visits, were impressed by the teaching methods of himself and Edith Dalton James and sought to replicate those methods all over Jamaica.

A prolific educator, Cooke was a teacher for 23 years; headmaster of Belle Castle All-Age School, Port Antonio Upper School and Montego Bay Boys' School; a prominent member and for some time, president of the Jamaica Union of Teachers (JUT).

In addition to this, he was also school choirmaster, scout leader, captain of the county of Cornwall cricket team, and member of the football teams of Mico College, the Young Men's Christian Association (YMCA), Portland and St James.

In more recent years, he was secretary and local chairman of the St James Cultural Committee, a senior elder and lay preacher of the United Church in Jamaica and the Cayman Islands.

An engaging storyteller with a phenomenal memory and a vast collection of noteworthy stories, he was also a strong supporter of Jamaica's cultural heritage and served as a member of the Jamaica Cultural Development Commission (JCDC) and as a judge of JCDC Festival competitions.

But most remarkable was his recruitment, representing the JUT, as the youngest member - at 22 - of the nascent People's National Party's (PNP) 21-member steering committee and the 7-member committee that drafted the Party's first constitution for its September 1938 launch.

His first stellar moment came in the federal election on March 25, 1958, when - on the ticket of the PNP spawned West Indies Federal Labour Party (WIFLP) - he was elected as member of Parliament for the parish of St James

Ironically, however, the new nation with the motto "to dwell together in unity" was mired in conflict even before its birth.

The problems were mostly Jamaica's, as there were more differences than similarities between Jamaica and the rest.

Jamaica and Trinidad and Tobago contributed equally to the bulk of the federal budget but Jamaica, with half the population of the union, had only 17 (37.1 per cent) of the 45 seats in the federal House of Representatives.

Port-of-Spain was the capital, preferred over Kingston, which was favoured by most Jamaicans.

Located in the Northern Caribbean, a thousand or more miles from some of the more distant members, Jamaica was isolated from the nine other members of the Federation, comprising more than a dozen British colonial islands, excluding the British Virgin Islands, which are part of the archipelago in the Eastern and Southern Caribbean.

That led to wry classification of the union as a "salt-water federation". Premiers Norman Manley of Jamaica and Dr Eric Williams of Trinidad and Tobago, both of the WIFLP, and Jamaica's Opposition Leader Sir Alexander Bustamante of the Democratic Labour Party (DLP) all declined to contest a seat in the federal general election.

That left the West Indies Prime Minister, Grantley Adams of Barbados, a WIFLP colleague of Manley and Williams, at perpetual loggerheads with the powers in the most significant member states.

There was no customs union, no federal taxes, and constant squabbling over freedom of movement and development planning.

Following a threat by Bustamante to withdraw Jamaica from the Federation when next the Jamaica Labour Party (JLP) was empowered, Manley called a national referendum and on September 19, 1961, the electorate decided that Jamaica should withdraw from the Federation.

After the 1962 general election preceding independence, Howard Cooke was appointed as an opposition senator, serving until 1967, when he was elected to the House of Representatives as member of Parliament for North-Western St James.

Re-elected as MP in 1972, in Michael Manley's accenssion as Prime Minister, Mr Cooke was appointed Minister of Pensions and Social Security, but later transferred to Education and, finally, held the post of Minister of Labour and the Public Service until the change of Government in 1980.

When the PNP returned to power in 1989, he became President of the Senate and later moved into King's House as governor general on August 1, 1991, remaining there until his retirement on February 15, 2006.

It had been a very long time since Cooke persuaded fellow teacher Ivy Sylvia Lucille Tai to join him in his sacrificial social work in the late 1930s and in holy matrimony on July 22, 1939.

He and Lady Cooke transformed King's House into a home where the humblest Jamaican felt a sense of belonging. The Governor General and First Lady cultivated Jamaican fruits, vegetables and ground provisions and tended livestock on the land at King's House. With the work of their own hands and by the sweat of their brows, they fed their family, staff, guests and visitors.

Already celebrated in the naming of Howard Cooke Boulevard and the thriving Howard Cooke Primary School, the former governor general was honoured further by the naming of the Montrego Bay-based Howard Cooke Campus of the International University of the Caribbean, of which he was chancellor.