St Bess farmers on the rebound - Picking up pieces after fire 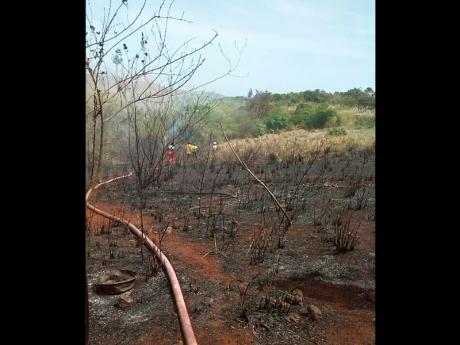 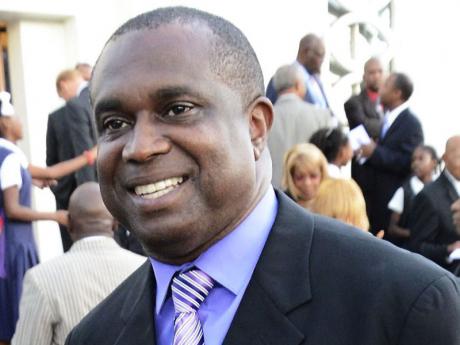 Member of Parliament Richard Parchment said farmers are to get assistance from the Government. 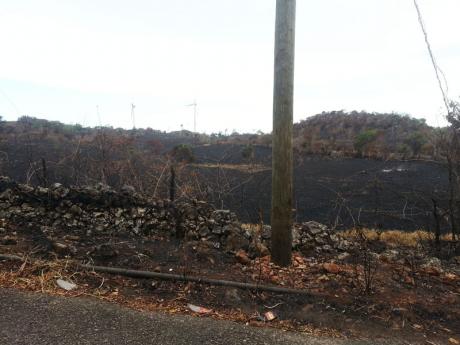 FARMERS IN Malvern, St Elizabeth, who were affected earlier this week when fire ravaged farmlands in the 'bread basket parish, are still mourning their loss and say they are fearful of praedial larceny.

Anthony Hamilton, who shares a farm with Lorin Gayle, says they were greatly affected by the fire, and says timeliness is of the essence, because in addition to the shortage of feed for the animals, there was also an increased concern about praedial larceny as the area for the cattle to graze is now limited and the fencing surrounding the animals has been destroyed.

The Black River fire station says reports from a large cattle farmer in the area suggest that someone lit fire which spread quickly because of the dry conditions.

"It's about 600 acres [that] was damaged; we lost about 300 to 400 acres [of] pastures that we had for the cows, and we lost a store house that we had medication, feed, hoses, and spray pumps," Hamilton explained.

Animals had to be move

"[Representatives from the Rural Agricultural Development Authority] have sent water for the animals and they are arranging some feed.

"We have about 290 [cows]. We moved them from across the road to a different area, and we [took] some to Southfield. We have them in different herds," Hamilton said.

He said as a result of the pastures being destroyed, the cows had to be grazing on previously grazed lands.

"Where they are now, across the road, is a place that we used to put them sometimes, but the place is not big enough for them. Those are pastures that have been fed on, and (we) are waiting for rain for them to grow, so we have to go back and put them in there. They are short on food. On the farm [in Southfield], it's the same issue. Down there, we have to set up a feed lot. We feed them in the mornings and send them out in the pastures for maybe four or five hours, they munch on what they can get, and then we take them back in," he told Rural Xpress.

He said not only was there a concern for a shortage of food, but also praedial larceny.

"It sort of vulnerable now to thieves; they have easier access to the animals because everything is burnt out. They can see where the animals are, it's easier for them to go where they are now because they can cut any wire now, because most of the things are burnt out. So we want to start as soon as we get the go ahead. We even order some posts already because based on the final assessment that we made, we're going to need about 20,000 posts.

"It's more than 20,000 that was destroyed, because when you think about 300 to 400 acres and a post, is five or six feet apart. Once you get the perimeter fixed up [and] the grass comes up, you can put in the animals. Some of the wire can be used back, not all the wires are damaged.

"What we plan to do is do the perimeter first before we do the interior. For right now, where the animals are, they are more protected than they were a couple days ago, but there is a concern about praedial larceny. There is still a concern, it could still be better," Hamilton said.

"I have spoken to Minister Roger Clarke, and the officers from RADA (the Rural Agricultural Development Authority) have gone into the area to do an assessment, and to do an inventory for the farmers who have [suffered loss], and to do a monetary assessment of the loss. The minister could not say the level of compensation [but], he has indicated to me that because agriculture is so important to the growth agenda for Jamaica, we want to do everything that is humanly possible to ensure that agriculture remains the driver for those farmers who have suffered loss as a result of the fire," Parchment said.

The MP said while he understood the farmers' concerns for the preservation of their livestock and crops, this is not the time for farmers to use domestic water to wet crops and appealed to them to discontinue the practice of punching the National Water Commission lines.

"We have to stress water conservation. Now is not the time for the farmers to take the little domestic water and wet the crops. The domestic water that is coming through the pipes or the trucks must be used for hygiene [and] domestic purposes. What farmers must do now is just prepare the field and wait for rain because the Government is not in a position to truck water for them for agriculture. [It is] much too expensive.

"And we want to also appeal to farmers who are in the illegal practice of extracting domestic water so that the water cannot go to the intended customers of NWC. When they punch the lines and take the water, they don't have any lock-off so the water continues to run, and it doesn't reach to the householders who are paying their bills. People have to be responsible in these times, people can't be selfish. The only solution we have to the problem right now is to get down on our knees and do some hard praying for the Lord to send some rain," Parchment told Rural Xpress.