I am not extinct - Pt II 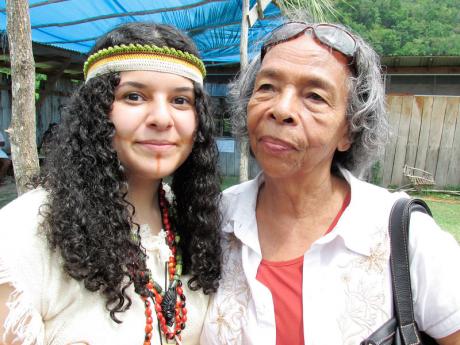 THE HISTORY books say the Tainos are extinct, and I, a trained teacher of history and a trained and practising journalist, have been repeating this historical 'fact' over the years.

Yet, I have always reflected on the 'extinction' of the Jamaican Tainos and wondered how that could be. And once I had a short vision of some Tainos hiding in a cave somewhere in Jamaica. In another dream, I found some clay zemis (gods) in a pile of stones.

Then, last year, I had the pleasure of meeting some Tainos from other Caribbean countries. That encounter heightened my doubts about the extinction of their Jamaican counterparts. Deep within, I harboured the desire to meet some Jamaican Tainos. I, who embrace my Africanness, was perhaps searching for another part of me.

Anyway, when I heard there would be a 'Taino Day' on the last day at the Sixth Annual Charles Town International Maroon Conference in June, I was excited. The day came, but on the previous days, I had recognised some Tainos whom I had met in Woodside, St Mary, last year. They are from Puerto Rico and the Dominican Republic.

On Taino Day, I approached a man and three boys who looked like Tainos, but the man said he isn't. He is Native American, but his wife is Taino. He showed me her, and I remembered seeing her the day before. I went over to her, and she said yes, she was Taino, a Jamaican Taino from St Elizabeth.

I opened my eyes and mouth wide. Totally bowled over I was. All sorts of chills permeated through my mind and body. Then my body shook violently, and I realised I was crying. It was like meeting long lost relatives, especially when she showed me her mother who was sitting behind us. I was frozen in time.

Then she told me I was part Taino, and I was having blood memories. I didn't know how to react to this 'disclosure'. But I remembered right away how my mother, described my paternal grandmother, whom I didn't get the chance to meet. According to my mother, she had straight black hair and fair skin and was from southern St Elisabeth, Taino territory. This is the same region in which the Taino woman, who turned out to be Dr Erica Neeganagwedgin, was brought up, and last week, Rural Xpress told the story of her experience as a Taino girl at Hampton School in St Elizabeth, the concealment of her identity, and her eventual acceptance of self and disclosure of her identity.

Rural Xpress also spoke with her mother, Olive Moxam-Dennis, who said she had always known she was Taino because her parents told her so. Both her parents were born in Blunthers, St Elizabeth. Her father was Scottish, and her mother Taino.

She said she and her siblings knew they were half Tainos, but the matter was never discussed because people say 'Arawaks' were primitive. She didn't feel special being Taino, but as a little girl, she had always wanted to know about her Taino ancestors. She felt that there were some ancestors out there she didn't know about.

She had long black hair, and people would say she was either French, Philippino, Portuguese, or Italian, but they never said she was Taino or Indian. And the little dark and brown-skinned girls in her community didn't identify with her because they said she was "different". Some of them were even her own friends. But they, the Tainos girls, would play by themselves, and walk home from school together. The young boys in the community couldn't get near to the then young Olive and her five sisters, who were fair-skinned.

Moxam-Dennis said there are many fair-skinned people in the Pedro Plains/Treasure Beach, Blunthers, Flagaman areas of southern St Elizabeth who could possibly be Tainos. South Manchester and south St Elizabeth are known as Taino territory that are replete with Taino caves. Canoe Valley, an important biodiversity region in south Manchester, is so named because the Tainos used to use the cotton trees grown there to make canoes.

These canoes, Moxam-Dennis said, were used by her relatives, and she still has relatives in Treasure Beach who are fisherfolk, just like her ancestors.

Her sisters, three of whom have died, she said, never accepted their Taino heritage. And though she has always believed she has Tainos ancestry, she has never publicity discussed it. The conversation with Rural Xpress was the first time, it seems. And thanks to her daughter, she is no longer afraid to wrap her arms around herself and her ancestry.