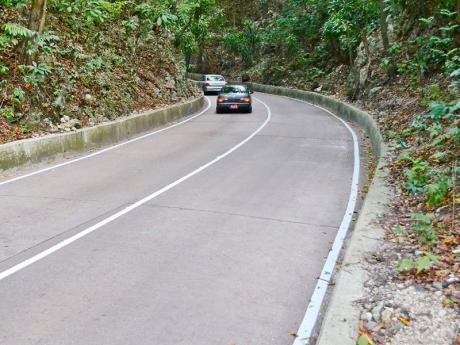 REHABILITATION WORK along the Fern Gully road leading to Milford Road in Ocho Rios has been completed, with just the marking of the road remaining, and residents have expressed appreciation for the improvement.

The project involved, among other things, concretising a section of Fern Gully, upgrading the drainage leading to Milford Road, and paving of the roadway.

Monica Collins, who lives and operates a business along the Harrison Town main road, a community linking Fern Gully and Ocho Rios, over the years, has expressed dissatisfaction with the authorities' inability to address the problem of flooding, especially during the hurricane season.

Collins, like many others, had repeatedly called for the situation to be rectified after being affected by floodwaters on several occasions.

When Rural Xpress visited her businessplace last week, she expressed pleasure with the improvement.

"Well, it's a little better. I don't have so much water coming across here now," Collins stated. "I appreciate it, and right now, there's no major problem as far as I'm concerned," she added.

Another business operator who gave his name as Graham, said he, too, was pleased with the work done.

"A lot of improvement has been done, and it's good," Graham told Rural Xpress. "I'm sure if and when the rain comes, we won't have as much flooding as before."

Graham also expressed delight that concrete had been used on a section of Fern Gully, stating that it should last a long time compared to the asphalt.

Communications manager at the National Works Agency Stephen Shaw told Rural Xpress that the marking of the roadway represented the final phase of the project. Fern Gully was closed over the weekend to facilitate the marking.

The rehabilitation project began in 2011 with a budget of more than $500 million as part of the Jamaica Development Infrastructure Programme.

The work was originally scheduled to last for nine months but was plagued by several delays.